The next day we traveled to Niagara Falls, via several buses and a plane into Buffalo. We were half asleep, but woke up when we saw the TV at Buffalo airport, bearing the headline “Government is debating giving driving licences to illegal immigrants”. Eh?!

We enjoyed Niagara Falls, and saw the spectacular Falls from pretty much every angle – from both river banks, the observation tower, and the  “Maid of the Mist” boat trip.

The Maid of the Mist takes you right up to the Falls so that you get soaked with the spray. With the incredible swell of the water I was a tad concerned and would have liked to have been given a lifejacket. I found the lifejacket storage box and stood next to it. Not that that would have been any use whatsoever had the boat overturned, but it made me feel better!

We also went on “Journey behind the Falls” which was also interesting although in hindsight I prefer the view from the front of the falls! For each of these adventures we were given a plastic poncho, so we ended up with quite a few. But they were good as souvenirs…  or the start-up for a poncho business.

We sampled American cuisine including “grits” and “dinner bread” (which turned out to be what the English would call crackers). We got talking to some Canadians who asked if we knew Rod Stewart. We did not. We spent a few days in Niagara, so that we could relax while we were there. As part of said relaxation we watched a bowling championships on TV. The commentator asked “so Billy, what’s your strategy for today?”. “I’m gonna get more strikes” said Billy. “Good Plan” said the commentator. We liked Billy’s plan for its clear aims.

We found the Hershey’s shop which gave out free samples being little cubes of fudge. In Niagara Falls there is the American side and the Canadian side of the river. A bridge joins the two, with US Customs at one end and Canadian Customs at the other. Every evening my partner would take some little cubes of Hershey’s fudge back in his pockets, and would “declare” them to US Customs. At first they were amused, but as the week went on they seemed more annoyed. I know how they feel – his jokes can wear a bit thin.

One day we went to a State Park upstream, on Goat Island. It was a beautiful crisp sunny autumn day and the leaves were starting to change colour (so we saw the Fall at the Falls 😉 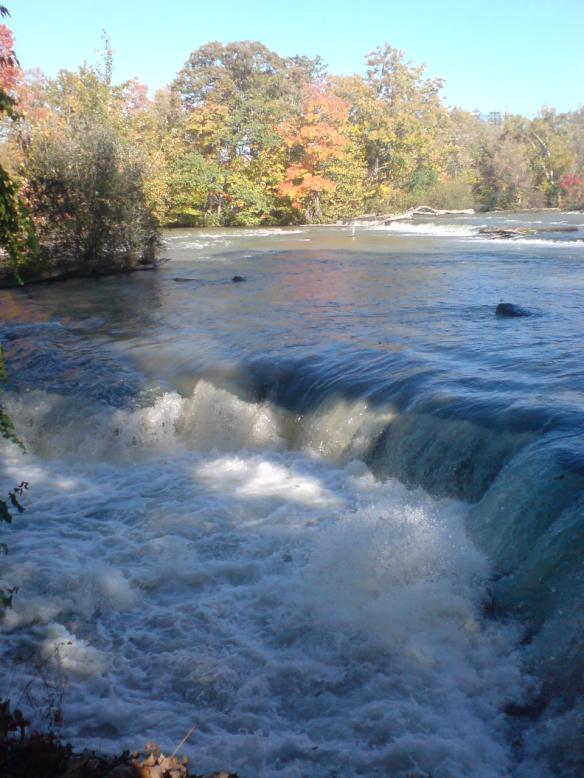 Overall I thoroughly enjoyed my stay at Niagara Falls. I preferred the Canadian side to the American side, mainly as the Canadian side provides a better view of the main falls. As a result, most of the restaurants, hotels and life of the town are on the Canadian side. However I enjoyed exploring both sides – upstream, downstream, left and right, back and front! The only downside for me was that much of the food choice was burger-orientated, especially on our budget. I was burgered-out by the end of our stay!