Catching an overnight flight from Lima to Cusco had seemed like a really good idea. We’d save on hotel bills, and wake up fresh and well rested the next morning, keen to explore. We congratulated ourselves on such an excellent plan. Unfortunately, after a sleepless night on a plane we didn’t feel quite so clever. In fact, we felt shattered. We are never doing that again! We made our way to the hotel to rest. 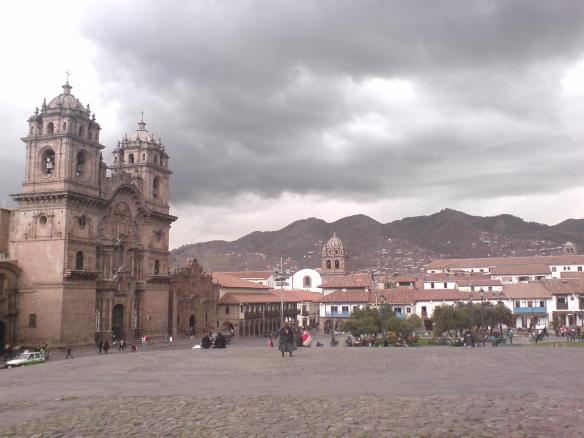 We had done our research beforehand and knew all about the altitude. Altitude sickness can be really serious and so it’s sensible to allow yourself time to acclimatise. Upon arriving at our hotel we were greeted by the sight of a elderly man leaving in an ambulance with oxygen tanks – we were told that he was fine when he arrived yesterday but the altitude had made him ill. So we knew that this was not something to take lightly. We drank cocoa tea which is a local remedy to help your body cope with the altitude (it is also what cocaine is made from, so had we had a drugs test we would have tested positive for cocaine, so I understand!).  What did surprise me however is the extent to it affected me. The altitude, I mean, not the cocaine. There was no cocaine! If there was then this would probably be a very different blog. I had expected that altitude sickness would be something to be aware of, but something which would only affect people who are older, with a heart condition maybe. I was in my 20s and relatively fit (if you ignore my weakness for chocolate!), so I was not expecting to feel any adverse affects. However when walking up a small slope I would get really out of breath, and when I lay down to sleep at night I was unable to sleep as my heart was beating so fast. One day my (roll-on) deodorant exploded, I assume due to the pressure, as that has not happened before or since.

We had planned to spend a few days just “chillaxing” in Cusco, precisely due to the possibility of altitude sickness. We wanted to be fully acclimatised by the time we went to the Machu Picchu. And it was a pleasant few days – Cusco was a lovely small town, with a beautiful main square, churches, and restaurants. One day when sitting on a bench, a series of children lined up to have their photo taken with us, one by one. We found this hilarious, and confusing – I don’t know what it was about us that made them want a photo with us – we don’t resemble Brad Pitt and Angelina Jolie or anything – far from it! And presumably they are used to having tourists around, as pretty much every visitor to the Machu Picchu will stop in Cusco. So this was very odd, but it made us laugh!