Beppu is famous for its hot springs, and it is effectively a spa town – a centre of geothermal activity. This fact was reinforced when we were having a stroll along the sea front and discovered 10 people buried in sand up to their necks! It was an odd sight! They were having a sand bath. I later had one… and can confirm that the sand is warm and it was very relaxing, despite looking like a reverse ostrich. 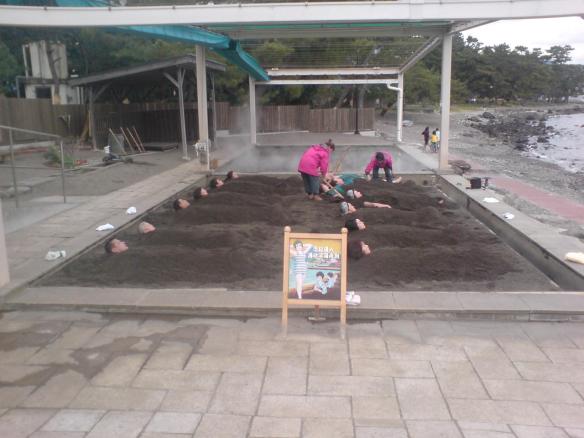 It was after I had my sand bath, at one of the spa complexes, that a Dilemma arose; To be Naked or not to be Naked?

When we went to the spa complex we knew somehow that swimming costumes were frowned upon. Upon checking my guidebook now, it does not appear to mention this crucial fact, which I would think would be of interest to the British tourist.

The swimming pools were not Co-Ed; there was a Men’s pool and a Women’s pool. My boyfriend trotted off to the Men’s pool, happy as Larry. I went into the Women’s pool area wearing a swimming costume. I was covered in sand from my sand bath and really wanted a shower before even thinking about the pool, but the showers were in the pool area (not in the changing rooms). Before I got anywhere near the showers, an elderly Japanese lady shouted at me and chased me out. There was a communication barrier (being that we couldn’t speak or understand each other’s languages!), but I understood that she was saying that swimming costumes weren’t allowed. I made noises to show I understood (thinking “ok that’s fine, I will leave….  but there’s no way I’m coming back in naked!”).

Unfortunately the lady followed me into the changing area and proceeded to stand over me demanding that I remove my swimming costume, there and then, without cover of a towel or any help for my dignity. Now I generally subscribe to the “When in Rome” philosophy and I am normally happy to blend in with other cultures, but we had been continually laughed at during our stay (as outlined in previous blogs, here and here) and that was with our clothes ON! So there was no way I was going to take my clothes off, so I could be laughed at there too! Seeing no other option, I turned and ran out of the changing room. I didn’t have a towel so all I could do was sit, covered in sand, waiting for my boyfriend to re-appear from the Male changing area, whereupon I borrowed his towel and put my clothes back on. In her defence, it is possible that she was trying to be helpful; helping me understand what I needed to do (remove my swimming costume) and maybe nudity is not a big deal there, which is why she stood over me… I have no idea. But with the communication barrier, that did not come across and she seemed like an officious member of the Clothes Police 😉 It wasn’t the best experience – I felt bewildered, upset, and pathetic, and I had to walk home covered in sand.

I don’t feel like I am well positioned to dish out advice on this… I can only suggest the following:-

After this, I was in need of some TLC. We went to a lovely pizza restaurant for something familiar, and had a chocolate ice cream sundae for pudding which had mini-chocolate bears on it! We enjoyed wandering around the rest of Beppu, although there wasn’t much to it – the main focus is the geothermal spas.

We did however find a kind of Japanese casino – we had seen them before in Tokyo. We didn’t understand what the game was about but it involved using tiny gold balls, which players keep in containers next to their chairs – presumably their winnings? Anyway, it seemed very popular! 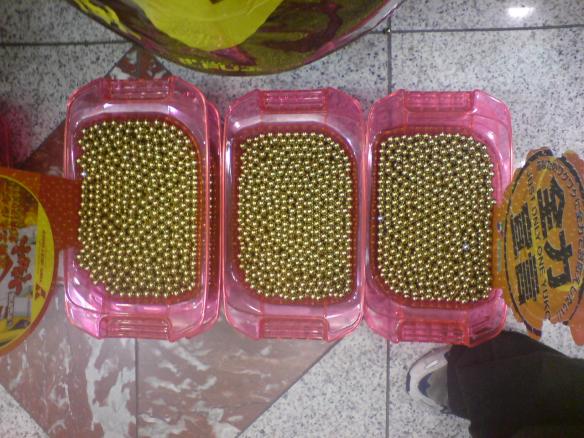 We slept in a Minshuku – ie. a room with tatami floors (ie. rice matting floors!). The bedding is basically laid out on the floor. It was comfortable but we were kept awake by some noisy tourists talking all night through the (thin) wall!

Like in Nikko, I noticed again that Beppu had really ornate manhole covers. I enjoyed the attention to detail. 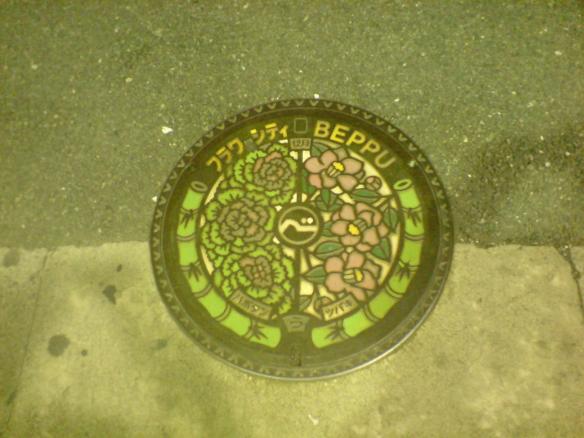 We awoke early for breakfast; so early that we got an earlier train than planned! (Which must be a first for us!) I am sad to say that I wasn’t sad to leave Beppu…