It makes sense to start by discussing sex, drugs and rock n roll. For that is the stereotype of Amsterdam, is it not. I was fascinated to explore a city whose response to (some) drugs and prostitution is to legalise them.

So, taking each issue at a time…  starting with sex. I was somewhat apprehensive to visit the notorious Red Light district. But once I ventured in there I was surprised by how “family friendly” it felt. That sounds odd I know, and I wouldn’t necessarily recommend it as an alternative to Disneyland. But I thought there would only be old men and stag-dos in the red light district. In reality, there were plenty of women, couples, just normal people strolling through. It was much more sanitised than I expected. There were full length windows in groups of 3, each with a woman in it. The woman varied from super-hot to not so much, and age varied also. Rightly or wrongly, it was even quite enjoyable, to look at the ladies in the windows – a novelty. We watched a group of English lads on a stag “do” – they had paid for the groom-to-be to visit a prostitute, but he didn’t want to, so they stood on the pavement trying to persuade him, and discussing who else could go in, since it was already paid for. I don’t know what conclusion was reached as we left them to it, to continue our stroll past peep shows and sex shops.

One night after a late dinner we headed into the red light district at around 1am. It had lost its “family friendly” atmosphere, and now felt sleazy and unsafe. The prostitutes were slightly more forward, flashing at us and beckoning. A man offered us “pussy or pills”. We realised we had to leave immediately, if not sooner! On our way out, another man called me a “fat momma” and then blew a raspberry at me – I assume he was on drugs. Either that or he needs to work on his social skills.

Back at our hotel when on the balcony in the dead of the night we saw… a couple having sex in a window opposite! (curtains open, light on, building overlooked by several buildings) I was really shocked at their exhibitionism! Ironic that having spent so much time in the red light district, we saw sex out of our own hotel window!

Coming onto the issue of drugs, we visited a “coffee shop” – a cafe where cannabis was being legally sold. It was bizarre to see it out in the open, but we didn’t hang around or smoke it ourselves, and there ends our experience of drugs. Nothing to write home about really!

Now for the issue of rock n roll, baby! We went to a club which I can only describe as Crazy! It seemed that the average age was about 14, so we felt a bit old. But it was fun – there was a bell behind the bar and the overly enthusiastic barman kept ringing it – I think you had to drink when the bell was rung. It was insane – lots of dutch songs, cheap drinks and enthusiastic dancing! It seemed like clean fun and we didn’t see any drugs or sex – but then why would you? – there’s no place for sex or drugs in a club when you can quite easily pick that up at the cafe next door any day! 😉

There were also plenty of wholesome family-friendly activities. We explored the parks, and watched some impressive skaters showing off in Vondelpark. We visited the Van Gogh museum and watched street entertainers (one of whom came out with possibly the best one-liner ever: “I like the way you’ve underlined your nose” – to a man with a thin moustache).

My favourite activity was a canal cruise which took us around Amsterdam the scenic way. I would definitely recommend this as a lazy and effective way to see the city. Unfortunately my boyfriend was a bit too lazy and fell asleep (or, as he claims, he enjoyed the view with his eyes closed so he could concentrate more… Hmmmm!!)  I can only apologise for the photo quality – we were using a rather  primitive camera phone! 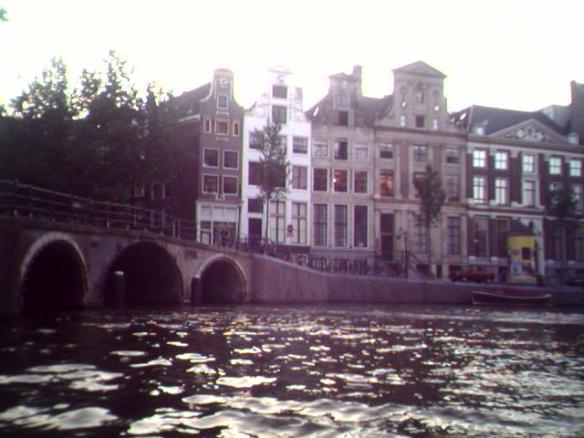 We also went to Anne Frank’s house, but we had both already been inside this when we were younger, so we saved the entrance fee and didn’t go in.