When I told my sister that I was going on holiday to Grenoble she said it was the armpit of France, or something similarly encouraging. I decided I didn’t care, as a holiday is a holiday, and in the worst case scenario at least I get a new “armpit” to look around, not the one I live in 😉 Plus, we were intending to use Grenoble as a base for skiing as well as seeing the city itself, so it wouldn’t matter if it wasn’t exactly Paris.

However I was pleased to find Grenoble very lovely. It had a small-ish charming old centre, which I liked, and a hill to climb giving views of Grenoble with snow-capped mountains in the background. I don’t think there is enough to occupy yourself for more than a few days, but it was a pleasant few days. 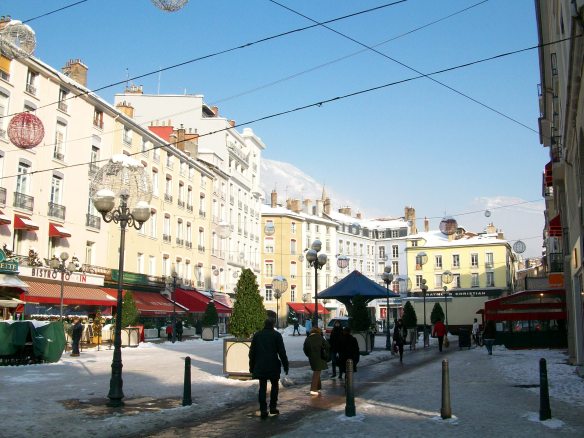 In fact we were lucky to get there at all – we had heavy snow before we flew to Grenoble, and had an evening of panic where we looked up the flights online and watched them all turn to “cancelled”.  We resigned ourselves to the fact that we weren’t going anywhere, but we turned up at the airport anyway, and luckily we flew!! 🙂 Sheer good luck – our flight was one of few that took off that day. It was snowy in Grenoble also, with piles of day-old snow lying in the gutters. It wasn’t quite the magical atmosphere of fresh snow, but to British people, any snow is exciting, even if it’s grey 🙂

There is nothing exciting to report about what we did in Grenoble – the usual wandering about, looking at the shops, having dinner, climbing a hill, visiting a museum, etc. But it was perfectly pleasant, and as a bonus it wasn’t very touristy, so we felt that we experienced the “real France” more than other places. 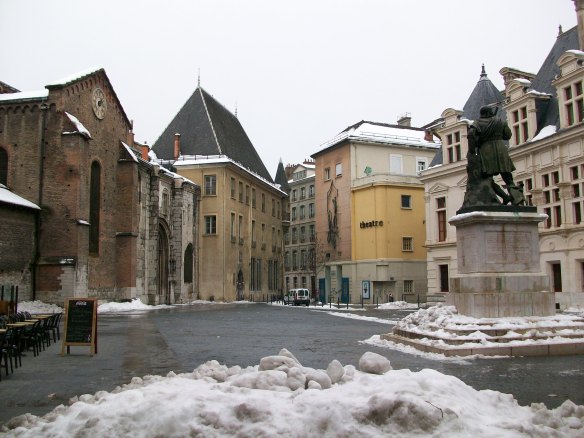 Once night we were cold and decided to go out for a nice warming curry. I ordered the Korma, as per usual, as I’m pathetic 🙂 The food came and suddenly we smelt a horrible smell. “What’s that nasty smell?” my boyfriend asked. “I think it’s the food” I replied. It smelt absolutely foul. I was horrified. I was so looking forward to my lovely creamy mild Korma and here was a smell that I could best describe as something you might find in the toilet. I thought the rice must be safe to eat so we could eat that and leave the curry sauce… but we can’t just eat plain rice – the sauce is the best bit, plus we’ve paid for it, and it seems rude to leave it untouched. We had a whispered debate and eventually decided to dilute a tiny bit of sauce with rice and try it. Amazingly, it tasted much better than it smelt. In fact, if you forgot that you actually wanted a Korma, and just pretended you were in some random place on the globe where they present you with a dish of unidentified spicy meat, it was quite nice. So that was our bizarre curry experience! It probably serves us right for being cultural philistines and ordering curry in France 🙂

Oh and we discovered “Quick” – a French version of Macdonalds. It has the best potato wedges 🙂

Next blog: Skiing around Grenoble.