From Grenoble we had a series of day-trips to ski resorts. I had been skiing once before (see my Skiing around Salzburg blog) and although I’m not going to be signing up to the Winter Olympics anytime soon, I love the scenery. So I’m always happy to go up into the mountains. We visited the Tourist Information in Grenoble, which provided us with good information about the Ski bus. Basically ski buses leave Grenoble bus station at around 6am every day, headed for most of the ski resorts in the vicinity. It was well organised, convenient (apart from the 6am start 😉 ) and good value (the bus tickets plus lift pass cost around the same as the lift pass would cost on its own). I would definitely recommend it as a day trip if you fancy trying out skiing, but don’t fancy a full ski holiday. We had three separate days out at ski resorts around Grenoble; Chamrousse, Villard de Lans, and Les Deux Alpes.

Our first ski resort was Chamrousse. We found the ski rental shop and I was pleased that there was a nice gentle baby slope right in front of it, with a drag lift.

Soon it was time to get on the chair lift to get to the bigger slopes. No-one could have predicted what happened next. To cut to the chase, I ended up lying across a chairlift, partly on a small child. I’m not proud of this, and I will be forever teased by my boyfriend for being so inept. Here’s how it happened…

We queued for the chairlift. A ski school of small children was also queueing. Every time a couple of adults got on the chairlift, the ski school teacher would ask if a child could go with them – I guess she couldn’t take the whole class on one “chair” (which had 4 seats) so she was getting her class to the top of the mountain one by one. So we aligned ourselves for the chairlift – me, my boyfriend, and a 5 year old child.

Now I don’t know if you’ve ever been on a chairlift. Normally, the gate opens, you shuffle forward into position and the chair comes around from behind you and you sit down into it. This chairlift was different. I got to the front of the queue, the gates opened, and I realised there was a conveyor belt in front of me. I was taken aback – I’m not confident on skis and so I froze, like a kid who’s scared to step on an escalator. After recovering from the shock of it, I realised that the small child and my boyfriend had both moved forward when the gate opened. I snapped back to life and moved forward onto the conveyor belt. But due to the delay I wasn’t aligned properly to sit down, so the chairlift swept me up as it went round and I ended up pretty much lying across the 4 seats, with the child squashed at the end of the chairlift and my boyfriend sitting on top of me (and laughing at me -obviously!). It wasn’t my finest hour.

Incredibly, they didn’t stop the chairlift – it kept rolling, and we managed to sort ourselves out by the time the bar came down. No doubt the staff were all muttering about “that stupid British woman”. I’m just lucky it wasn’t recorded as no doubt it’d be all over You Tube now 🙂  Anyway, in case anyone is concerned, the child was fine, we had a little chat with him on the way up the mountain, and at the top he happily skied off, leaving me to fall off the top of the chairlift in my own time.

Apart from the ski-lift debacle I enjoyed Chamrousse – it had slopes which were more challenging than a baby slope, but not so steep that you think you’re skiing down a vertical cliff to your certain death. The scenery was stunning, and it was a sunny day – so beautifully still, and I sat in the sun for a while just listening to the birds cheeping and feeling the warmth of the sun on my face.

On day two we visited Villard de Lans. The bus from Grenoble drops you in the village and you then have to get a second bus to take you to the resort. The buses were not perfectly synchronised so we had quite a wait, in which time we managed to visit the village shop and buy some snacks.

Unfortunately the weather was not great on the day we visited Villard de Lans. When we started to ski it was snowing fairly heavily and visibility was poor. We selected a nice gentle green run, but unfortunately the first 25 metres was quite steep. So I had to navigate the steep bit during a “white-out” which I found very unsettling. Everything was white, so the “walls”, “roof” and “floor” of my vision were all white and I could see no perspective. I found this terrifying so after a while I took my skis off and walked down the steep bit. A french couple stopped and asked if I was Ok, looking bemused at why a British lady was walking down the mountain. This was also not my finest hour. (Do you see a pattern emerging? 😉 ) 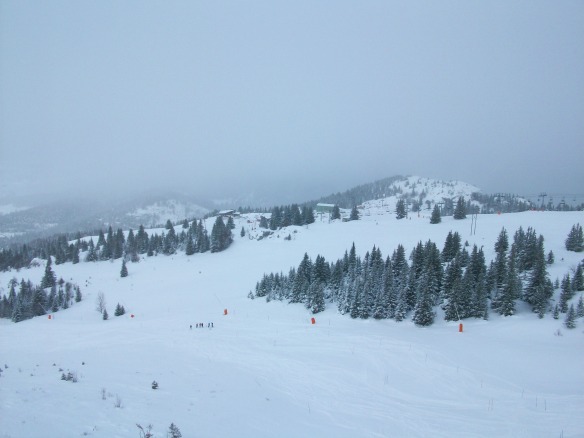 Luckily once we got onto the flatter green run it was a lot better. The lack of visibility was still alarming to me, especially since there was a steep drop to our right, but as we went on (and got lower down the mountain) this dwindled, and the weather brightened up.

I don’t think you could call my skiing a success here, but I escaped unscathed, so I guess that’s the most important thing!

The last resort we tried was Les Deux Alpes. This was my favourite skiing day. Probably because we didn’t actually ski. Let me explain… we were intending to take the gondola to the top of the mountain to check out the views, and then come back down and hire skis or snowshoes. To reach the very top of the mountain you have to take 2 gondolas and a funicular – and at each stage the views were stunning, so we stopped for photos. At the very top the views were spectacular and as it was a clear sunny day we could see Mont Blanc. We spent a lot of time at the top drinking in the views, despite the biting winds.

We paid a visit to the ice cave at the top of the mountain, which contained a series of animals carved out of ice, lit up with coloured lights for visual effect. The whole cave was carved out of ice also. It is certainly worth a visit if you have not been to anything similar before. However after a while I began to feel sick and dizzy, which I think was altitude sickness. I only experienced this in the cave and not outside. At this stage we decided to leave the cave and descend down the mountain. 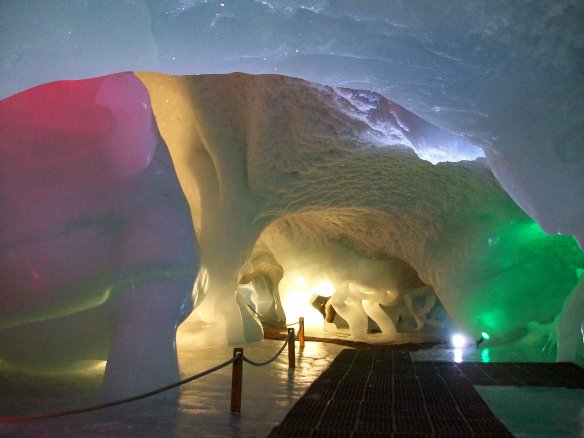 At the bottom, we spent our ski-hire money on a lovely fondue lunch instead, which was a definite highlight for me! It was warming and rustic, and we don’t normally splash out on big lunches at posh ski resorts! Plus, my success rate at eating is much better than my success rate at skiing 😉

Although I haven’t actually skied there, I would say that Les Deux Alpes was a good-sized resort with lots of hotels and chalets, a good choice of restaurants (and incidentally, we priced the fondue and it was about the same as a comparable meal in Grenoble – which I was amazed about). The piste seemed to be unending – it was a much bigger resort than the other two we visited. Although some may prefer smaller resorts as they are often quieter and cheaper. But whichever your preference, there are a good array of ski resorts within commuting distance of Grenoble.