Lets be honest, we went to Trieste not for its culture or fame, but because we wanted to go to Venice, and Trieste had cheaper flights. So the plan was to fly into Trieste, spend a few days there (it’d be rude not to!) and then take the train to Venice. Then train back to airport. Simples!

Trieste isn’t a tourist hotspot, and I was a tad concerned that we had booked too long there, as there isn’t a lot to do… but that turned out to be its charm. There are no tourists and therefore we saw the real Italy. If there was a lot of sight-seeing to do, we’d be planning our days around “the sights” and rushing around trying to see everything before it’s time to go home. In Trieste, there were fewer sights, so we had the luxury of time to relax and enjoy just “being”. In fact, this trip goes down in history as the most relaxed I have been in living memory. And that’s quite a claim! 🙂 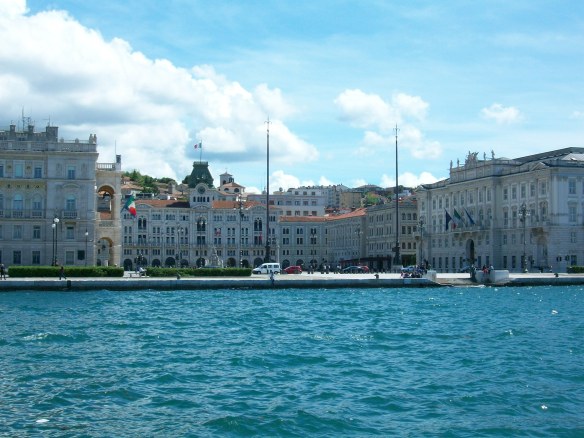 So what sights does Trieste have to offer? Well, there’s Piazza Unita D’Italia, the large square on the sea front with nice architecture, which houses the town hall (photo above). There’s the “Canal Grande” nearby with lots of little boats. There’s a cathedral and a castle on a hill (Basilica di San Giusto and Castello di San Giusto). And the sea front, with a harbour to wander around, and a long stone pier to sit on and watch the sea. 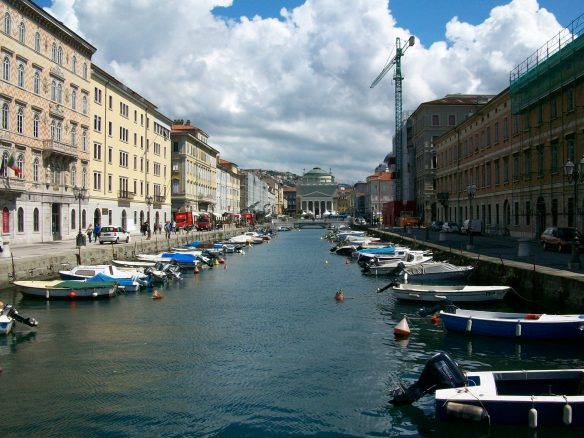 Apart from the main sights, I will remember Trieste for the small winding streets, the ice cream and the pizza. We found a little trattoria near our hotel, and I ordered a pizza with truffles on it. It was divine. Getting an ice cream was our daily ritual, and we found a place with the darkest richest chocolate ice cream and spent the evenings wandering along the sea front, watching the sun set.

It wasn’t all great though – one evening we went up to the castle on the hill at dusk. On reflection this was silly – if you’re going somewhere which could be deserted, on a hill, don’t go at dusk! We got up there and there appeared to be no-one else there. Then I spotted a man behind a tree, and then some other people came out from the tree. I kept my eye on them. One of them walked around the back of us at a distance. I turned around and saw that another of the men was walking straight towards us, his eyes fixed on us. This freaked me out – this seemed like odd behaviour and it was going dark, with no-one else around. We made a beeline out of there, and we were absolutely fine – we weren’t mugged or anything – but they say you should use your intuition, and something about that situation didn’t feel right so I’m glad we left when we did!

One day we went on the boat to Muggia, which is a fishing village across the bay. I was terrified of being sea sick, but it was a short crossing and I was fine. Muggia was truly charming, with its multi-coloured buildings and tiny ally-ways. We saw a couple who had just got married outside the church having photos taken, and we then wandered around the little streets – I almost felt like we were intruding and spoiling their pretty little town, by having tourists tramping round it. We spent some time on the pier in Muggia watching the large purple jellyfish bobbing about in the sea. It was a lovely day trip, and it was inexpensive since the boat is a ferry for the locals, not a tourist boat.

Another day, we went on a day trip to Grotto Gigantica (Gigantic Grotto, in case you need a translation 😉 ). We took the public bus from Trieste (bus 42 from Piazza Oberdan), which was tricky -we struggled at every stage – firstly we couldn’t find the right bus stop (it’s at the South side of Piazza Oberdan, from outside the Veneto Banca/Allianz building), then we found out you can’t buy tickets on the bus – you need to go to a nearby bar or shop. Then we missed our bus stop getting off, leaving us with a scenic walk back to the Grotto. Looking on the bright side, at least we saw some of the countryside 🙂 If you are planning to attempt this by public bus then I would advise asking  the bus driver to give you a shout when you get to the Grotto bus stop, as it’s not clearly marked and is basically in the middle of nowhere in the countryside.

Anyway, the Grotto really was gigantic – they weren’t kidding. The biggest accessible cave in Europe, I think, with plenty of stalagmites and stalactites. This was also a good day trip, should you be short of things to do in Trieste. It’s around an hour’s drive away (probably less if you have your own car).

After a few days in Trieste we got the train to one of the most beautiful places on earth – Venice!! 🙂

4 thoughts on “Trieste : the real Italy”