Before I went to Florida I was skeptical – I’m not into Disney and I’m not a “beach” person.  So I was not at all expecting to fall in love with the place like I did. And Miami was the first I saw of Florida…

I loved the beach, the boardwalk, the fact that you can watch massive cruise ships coming into the harbour, and a beautiful street called Espanola Way. It had blossoming flowers and lovely spanish architecture and in the evenings it was very atmospheric, with restaurants and bars. I would recommend anyone to visit this street if you are in Miami.

Nearby is the Lincoln Mall, which was good for shopping and also has its fair share of bars and restaurants. From there you can walk to the ocean and join the boardwalk that runs along the beach. One day we hired a segway and a bike (Segway around $35 an hour; Bike around $5 an hour) and cruised down the boardwalk – it was bliss, and the best time to try out the art of the Segway! Even though this looks terrifying, it was OK, and only became scary when I went fast!

We explored Ocean Drive – the street that runs alongside the boardwalk. This mainly comprises fancy restaurants and bars. We found many art deco buildings both there and in the streets running parallel to it. 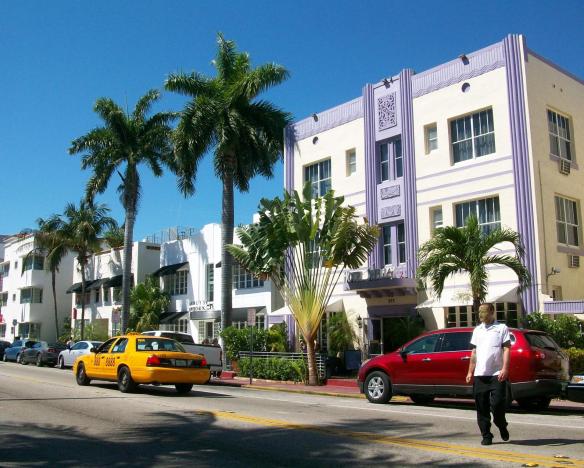 The beach itself did not disappoint, with its was vast white sands stretching off into both directions. We were however surprised to find large jellyfish washed up on the beach. They looked terrifying, and the lifeguards had raised a purple flag to denote danger due to jellyfish… Yet people were still swimming in the sea! I was confused so spoke to the lifeguards. They said shrugged and said that once people have been stung they probably wouldn’t be doing it again! 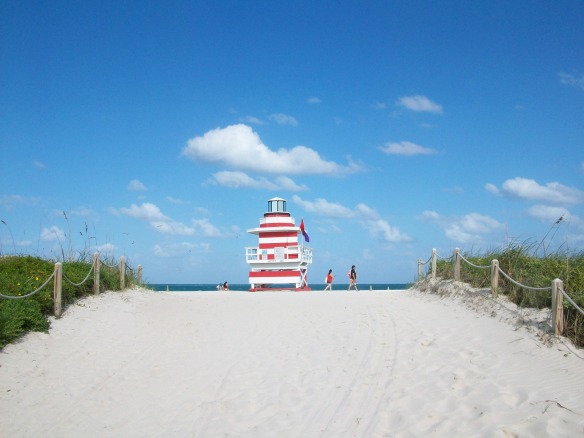 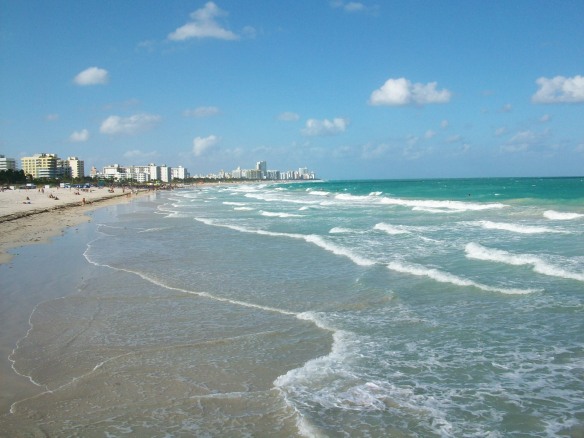 One day we ventured to the mainland, to explore Miami-proper, as we had technically spent our entire holiday on Miami Beach and I felt a bit guilty that we had not seen the whole city. We got a bus to Downtown Miami, however we got sidetracked by Bayside Marketplace, which is a large shopping centre with restaurants and bars. But to be honest I wanted to go back to Miami Beach!

While we were waiting for the bus, a man who I can only describe as a “crackhead” started shouting at another couple, and then turned his attention to my boyfriend. I can’t remember what he said now, but it was abusive. There’s something surreal about standing in a busy street in broad daylight and having someone standing a few metres away screaming abuse at you. I would have been scared but for the fact that there were people all around, and I had to turn away to stop from giggling. It was very strange!

Overall I loved Miami! It felt like permanent summer, with sunny blue skies, a vast ocean, and a vibrant town. We were also able to eat healthily by choosing massive salads – with lots of cheese and dressing, obv! 🙂

Previous blog: How to pack for a Round the World Trip