When I was a teenager I read a series of books with teen characters called “Summer” and “Seth” in them. I probably shouldn’t admit that 😉 I can’t remember what the books were called, but they were set in the Florida Keys. I was transfixed by the descriptions of azure water, brilliant sunshine, and the wall of heat that hits you on arrival, and from that moment on I wanted to go there!

We drove along the Overseas highway, which ties the Keys together. We didn’t really have a plan, except that we wanted to get down to Key West at the very bottom of the Keys. We meandered our way down there, stopping to watch parasailing in a bay, and to grab food. We spotted some Pelicans and pulled over – these are very exciting to me as we don’t have them in England. 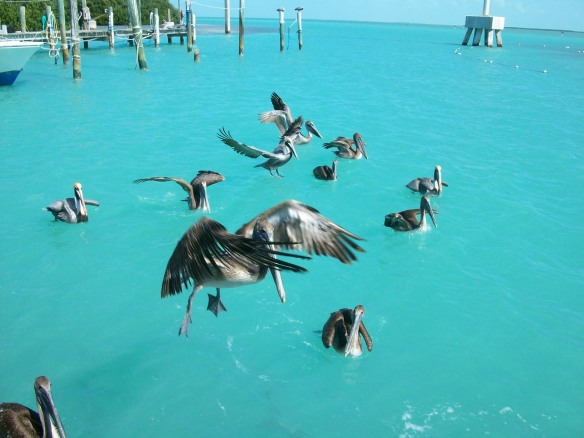 It turns out we had stumbled upon a really cool place called Robbies, in Islamora, where there are massive Tarpon fish that you can feed – but this is not for the faint-hearted! Pelicans gather there to try to steal the fish food, but that suited me as I had a great photo opportunity with the ungainly giant birds! 🙂 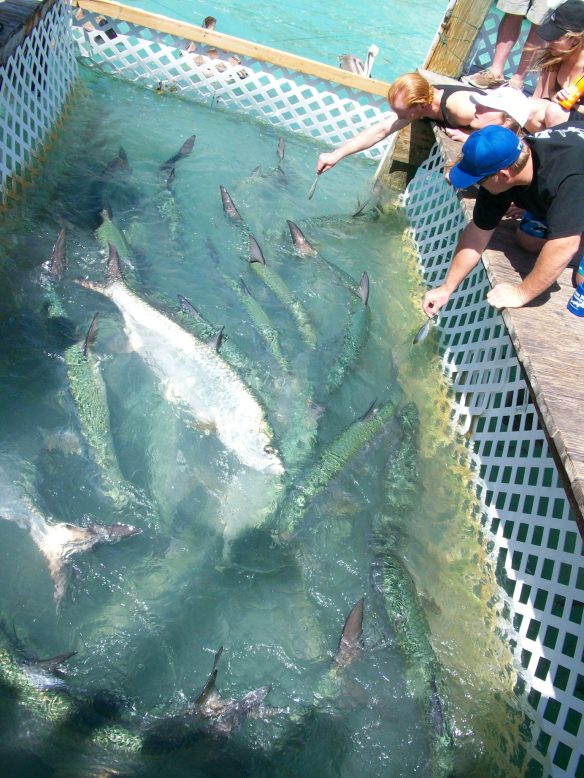 (by the way, the fish are wild – the plastic fence is not to keep them in, but rather to keep Pelicans’ beaks out! The fish can swim away under the fence if they like.)

We continued South along the Overseas Highway. This was an experience in itself, to have the sea on both sides of the road! On the way back we stopped at Big Pine Key, as there were signs warning us of Key Deer. I wanted to see a deer but thought it was a long shot. At the dead of night we left the Overseas Highway and drove until the edge of the town. I turned a corner, and there was a deer right in my headlights! It was a really special experience. He paused and looked at me, and then ran into the hedge. We waited but he didn’t come back. 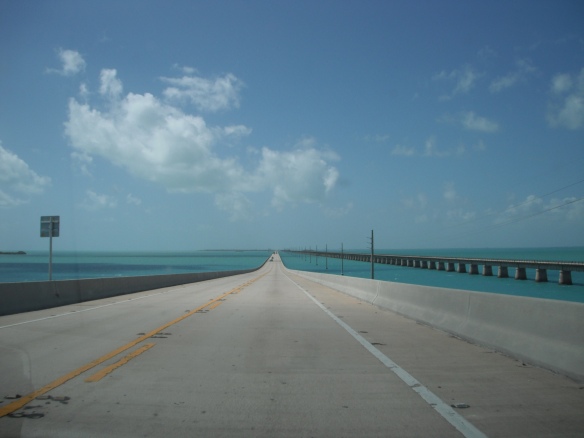 We realised the downside to having one road in and out of the Keys – on the way back there was a car accident ahead and this caused a massive traffic jam. There are no other roads out of there, so we were stuck for 1.5 hours. Unfortunately cars who came upon the traffic jam either didn’t understand the etiquette of what to do in a traffic jam, or thought we were all parked. So they overtook and sped up the left side of the road. Obviously they had to come back in about 10 minutes with their tails between their legs, and join the back of the queue – to the sarcastic applause of people in the traffic jam 😉

Key West, at the very tip of the Keys, was charming, however less so than I had expected. It had all the hallmarks of a charming place – beautiful houses with verandas and white picket fences, wide roads, trees, and the ocean. However it was very touristy – lots of people, traffic, difficult to park, and lots of T-shirt shops. Which, to be fair, is all part and parcel of a lovely place – everyone wants to go there!

We tried Key Lime Pie, looked around the town, and ended up at the sea front admiring the enormous yachts, which was really nice. We stayed there to watch the sunset over the sea – a good idea, but an idea apparently shared with half the population of Florida. It was so crowded we couldn’t get anywhere near a place where we could see the sea. In the end we walked up to a dock area, which wasn’t quite as nice, but we saw the sun set! 🙂

One day we tried sea kayaking, which was good but problematic. Who knew that sea kayaks have holes in the bottom of them?! I didn’t. So when the water came into the kayak, it found me fully dressed, with my passport on me. Not ideal! Secondly, a man had told us that a manatee had been spotted in the sea – which sadly we did not see. But I thought – if a Manatee can swim down here, why not an alligator?! It’s not that far from the Everglades. Plus, everyone knows sharks live in the sea. So I had a feeling of terror throughout my sea kayaking experience – as well as a wet bottom.

Overall I adored the Florida Keys. It was touristy, particularly in Key West, but it was also lovely. One night we got off the beaten track and went to a pub in the back of beyond where there were fairy lights and a live band, and we ate chicken salad while overlooking the marina – just lovely! 🙂

Next blog: The Everglades, Florida