I feel that this is going to be very unpopular blog post! 🙂 But hear me out.

As background – I’ve never been to any of the Disney parks before – through choice. I find “themed” things quite grotesque. I don’t like many rides. I think the ticket prices are extortionate ($172 each for 2 parks). Ditto the parking ($14 per car per day). And I’ve never seen the attraction of hugging a 6 foot Mickey Mouse.

But I happen to have chosen a boyfriend for whom Orlando is his spiritual home. He went there on family holidays as a kid, and absolutely LOVES it!! He has fond memories of getting up at the crack of dawn and spending the day racing around the park from ride to ride. So I agreed to go with him. Compromise, right?! And I got a new T-shirt for the occasion.

We went to the Magic Kingdom – I thought this was the same as “Disneyworld” or “Disneyland” but I am lectured that they are in fact different.  Disneyworld is in Florida; Disneyland is in Paris / Hong Kong / California. Disneyworld encompasses 4 parks (Magic Kingdom, Animal Kingdom, Hollywood Studios, Epcot) as well as 2 water parks (Blizzard Beach and Typhoon Lagoon).

Let me set out what I did like about Magic Kingdom first, so I don’t get lynched. The parade was quite good, with salsa music and a dance routine, and I enjoyed the light show, fireworks, and Tinkerbell flying down a zipline from the castle. Some of the rides were fun, eg. the teacups, and the Buzz Lightyear ride, where I beat the game, and my boyfriend, with a score of 99999 or whatever the display went up to. I was also pleased to go on “It’s a Small World” so I could finally see the ride that Ross Geller was on about in Friends.The food wasn’t as expensive as I expected, and the burgers were surprisingly lovely – and I loved the toppings bar, where you can add as many salad items as you like onto your burger. (I also thought the customer service was excellent, as detailed in next week’s blog).

However, it took about an hour (no joke) to get from the car to the actual park. First you get on a shuttle which takes you to the first gate, where there is some form of queuing – I think for tickets. Then you queue to get on either a monorail or paddle steamer. We chose the latter, and there was a long wait. Then another set of gates – security bag check I think – more queuing. Then finally fingerprinting, and you’re in.

I have a real objection to the need to take fingerprints to go into the park. I don’t want my fingerprints on whatever database they might end up on, to be bought and sold by random corporations for whatever end. Not to imply that Disney would do that – I would hope not. But I’m sure things like that happen in the world. I was told by a lady in Orlando that Disney don’t actually “fingerprint” per se, they just tell you that they do to deter people from sharing tickets, and in fact they take an imprint of the shape of your finger, which is less bad, but something I’m still uncomfortable with.

Anyway, once inside the park, I didn’t like the crowds, the hideous amount of “theme-ing”, and many of the rides. I felt sick after Space Mountain (which is a rollercoaster which doesn’t “bank” to the side to ease you around the corners, but instead jerks you from side to side like a rag doll).  But the most terrifying thing was the Monsters Inc. show, where they were picking out individual members of the audience and making them tell a joke or sing. I think I would have run for the exits if they picked me!

Unfortunately my view of the park on the day was probably coloured by the freezing cold weather. You’d expect Florida to be hot, but we brought the English weather with us, and it was a record low of 42F / 5*C. I had flip flops on which wasn’t much fun, however I didn’t dare pop back to the car as it would have taken so long. Being freezing cold doesn’t help any experience!

Two or three of the rides broke down while my boyfriend was on them, so he was given “fast-pass” (queue jump) tickets as compensation. This was a pain as he was stuck on Splash Mountain for 30-40 minutes, and I was waiting at the bottom so I had to stand and wait / sit in the gift shop. As he had so many compensatory fast pass tickets, they kindly transferred them to the next day so we could use them at Epcot. 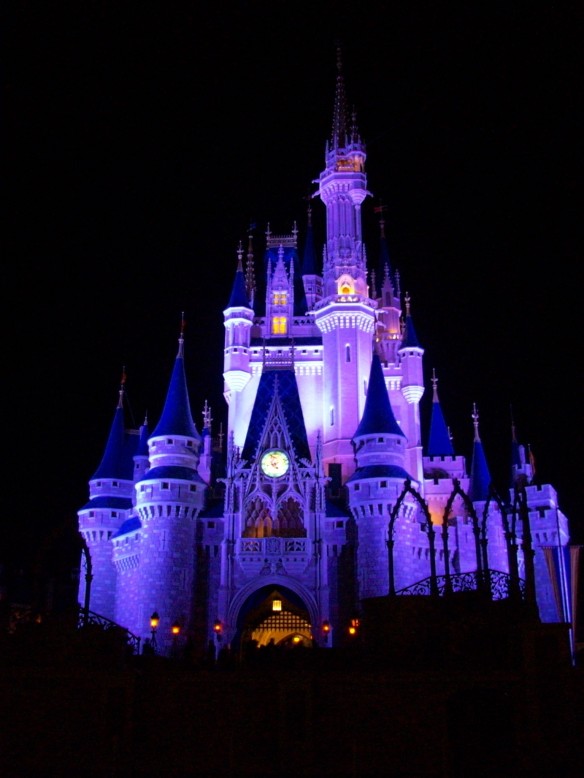 Overall I did not enjoy my time at Magic Kingdom. There were enjoyable elements (eg. exiting the park… just kidding!). But I think it’s probably best for small kids, or seasoned “Disney” addicts who have been going for years and just love it. It didn’t do anything for me. I will redeem myself with Disney lovers in next week’s blog, as I much preferred Epcot 🙂

2 thoughts on “Disney World: A Magic Kingdom this wasn’t”