If I had to sum up Hanoi in 3 words it would be (1) humid, (2) motorbikes, (3) bustling. Before I went, a colleague told me about her trip to Hanoi– she met two British ladies there who were too scared to leave the hotel because of all the motorbikes everywhere! My colleague ended up taking them round with her, or they’d have stayed in the hotel all week! I thought this was ridiculous – surely even if you’re not brave enough to cross a road, you’d be able to walk around the block on the pavement? Now, I still think it’s ridiculous, but less so. I do kinda understand where they were coming from. The motorbikes are everywhere. And I mean EVERYWHERE. They are coming at you from all directions, often on the wrong side of the road, sometimes on the pavement, and normally packed with people. It is not for the feint-hearted! 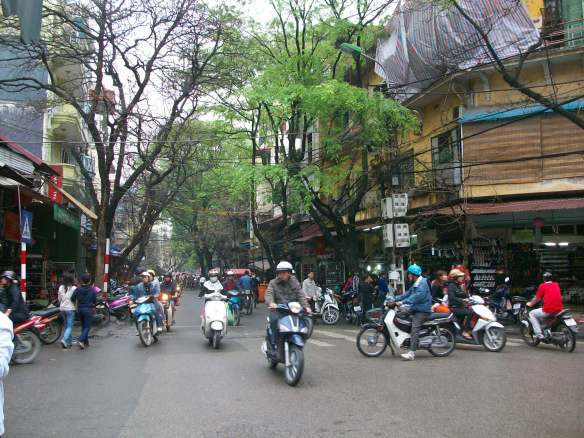 We learnt a few tricks:-

Traffic shenanigans aside, we had an amazing time in Hanoi. It was a wonderful city. We stuck to the old town, around, and particularly to the north of, the big lake. The lake is called Hoan Kiem Lake, and I am reliably informed that giant turtles live in it. We didn’t see any but the water was murky. The pavilion that sits in the middle of the lake is called Tortoise Tower (which reminds me of the Teenage Mutant Ninja Turtles.. Turtle Power!). 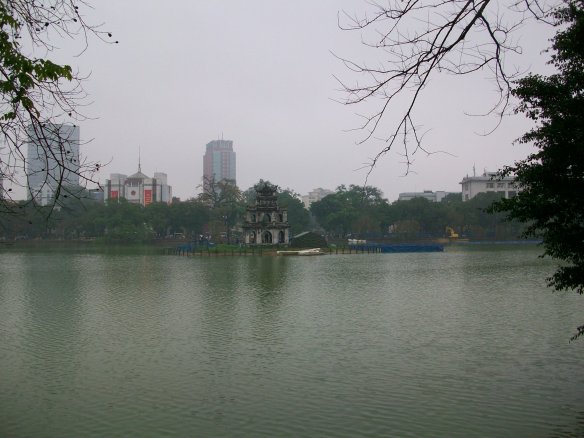 There are plenty of tiny streets in the old town to wander through – all as cute as each other. It was hot and humid and we needed waterproofs pretty much every day.

It felt safe at night as well – obviously the usual precautions of sensible travel should be observed like any city, but we happily wandered around, taking in the hustle and bustle of the bars and restaurants, and watching the street vendors serving steaming food to people sitting on tiny stools. We visited the night markets, and I bought some flip flops. Outrageously, I had to buy Men’s flip flops as my feet were too big for women’s (even though I’m only a UK size 6 which is pretty average).  I also looked at some lovely Chance perfume by Chanel. I thought it was genuine… “It’s sealed in cellophane so it must be official!” Sadly I was a tad naiive… it was not genuine. Or if it was, Chanel have decided to increase their “aftershave tones” in the perfume… ahem!

We also admired the ladies wearing the traditional conical Vietnamese hats, carrying the large “scales” on their shoulders (like weighing scales, not the reptilian variety). They were often angling for a photo opportunity in return for cash, and will often approach you and plonk their scales on your shoulder. They are sooo heavy!! Especially for these petite middle aged Vietnamese ladies – I have no idea how they do it!!

We made our way around some of the main sights of the city, such as the Mausoleum – just like the one in Beijing, this contains the embalmed body of “Uncle Ho” (ie. Ho Chi Minh, a Communist leader who died in 1969). We tried to visit this but it is not open all the time and sadly we missed it. 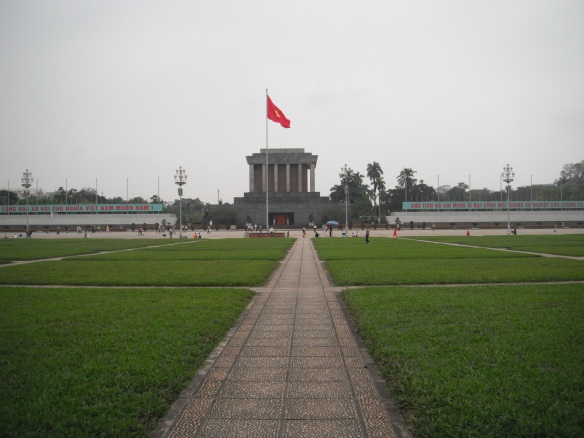 We also made our way to a beautiful pagoda, but the sign said “Suggest all the People No Wear the Short to the Pagoda” so we couldn‘t go in. Be warned – don’t wear shorts!

One day we took inspiration from Top Gear (British TV programme) and tracked down the remains of a B52 bomber that crashed in a lake during the Vietnam War. We had difficulty getting there in a taxi, as it is out of the way and the taxi driver either didn’t know where it was or didn’t want to drive all the way there. He stopped a couple of times and assured us we were there. The people on the pavement agreed that we had reached our destination, and if it wasn’t for me looking at the map beforehand and tracking where we were, I would have believed them. He did get us there in the end, and I could kinda see his point – it was a tiny surburban road – not really a tourist hub! But sure enough, there was the B52 bomber, clearly visible in the lake. A plaque explained that the Vietnamese shot down the American B52 bomber in December 1972. Obviously there is no love lost to the USA, which is described as imperialist and violating Hanoi airspace. While we were reading the plaque, an elderly lady walked up and hit my boyfriend on the shoulder! I assume this was because we are westerners and therefore tarred with the same brush? No doubt the memories of the terrible events of war were still fresh in her mind.

Not wanting to risk another dodgy taxi-ride, we walked back into the city centre. We passed through the botanical gardens and saw some ladies doing tai chi with large red fans. It was very peaceful.

We also passed a road-side barbers. Literally! As in a chair, an umbrella, and a mirror. And some scissors.

Overall we loved Hanoi. It was bizarre to go to a cashpoint and realize you’re a millionaire!! Due to the exchange rate, £10 is around 333,000.00 Vietnamese Dong. Wahay!! 🙂

We had a lovely time and although the weather was either raining or thinking about raining, we came prepared and we happy to wander around in our waterproofs, day and night, taking in the sights and sounds of the old town.