I didn’t have any prior knowledge of Vietnamese food, so was intrigued to try it. One of my favourite meals in Vietnam was a tiny family-run restaurant consisting of 1 table, where we enjoyed Banh Khoai (a rice-flour omelette containing prawns, pork and beansprouts, served with a mint salad and spicy satay sauce). It was delicious and inexpensive.

Street food is the mainstay of Vietnamese food. It is generally eaten on tiny stools by the side of the road. My boyfriend is over 6 foot and I’m not tiny, so we felt faintly ridiculous sitting on them with our knees up around our ears.

We mostly tried noodles with vegetables, and Vietnamese spring rolls (Nam), filled with vermicelli, beansprouts and carrots, accompanied by a sauce that I think is white wine-vinegar and chilli. That probably sounds gross but it was lovely! 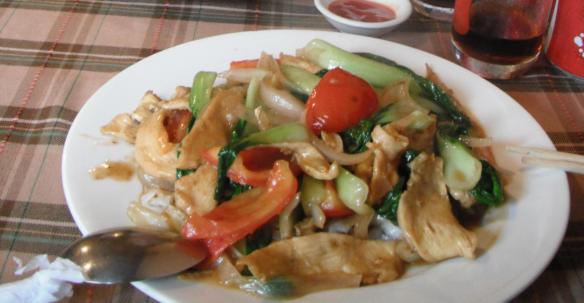 We also enjoyed beautiful coconut and pineapple smoothies while sitting on these tiny stools. I can’t say that the tiny stools were comfortable (I was too worried about breaking them!) but it was fun to perch there watching the locals go about their business in the warm evening.

One night we tried a Thai restaurant which was delicious, but the food was as hot as the sun. We ordered about 5 drinks each to cope with the heat as my mouth was on fire. After we had finished the waiter came over and asked, concerned, if we had ever had Thai food before, which made me laugh! I think he was doing some kind of survey, but it was a fair question after watching us sweat our way through the meal.

Unfortunately after getting food poisoning in the USA my tummy was still unsettled upon arrival in Vietnam. I wanted bland food (English food, if you will 😉 ) which wouldn’t be a challenge for my tummy. I was delighted to find that the French influence in Hanoi meant that there were amazing baguettes! I enjoyed a few excellent tuna baguettes during my time there, which isn’t very Vietnamese but my tummy had a chance to recover.

This worked for a while, but after a meal in Hue I got food poisoning again. The water isn’t safe to drink and I suspect that the salad may have been washed in it. I’m not sure, but I was ill afterwards, and I couldn’t shake it off. After a while, in my infinite wisdom I read a Foreign Office website which said that if you have diorrhea for over 2 weeks in Vietnam you should seek medical advice. I was quite alarmed so we stocked up on Immodium and tried to normalise our diets – and what better way of doing this than with pizza?!

Ah pizza! We ordered a pizza each in a food court in Danang. The waitress brought us 4 plates for each pizza. That’s right – 8 plates! She looked really upset when she realized it for was 2 people, and 6 of the plates were unnecessary. They had the last laugh though, as the pizzas were larger that we expected and too much for us. We asked to get a box to take them home, which caused confusion and resulted in my BF and a train of 3 Vietnamese people walking round the food court to find a box. It was all quite confusing, as was the payment system (you had to put money on a card, which could then be spent in the food court).

We enjoyed all the food we tried in Vietnam, but we had a bad experience in Ha Long Bay. As most of the tourist restaurants were expensive, we headed into the town and found a tiny restaurant for locals which was cheap and simple. We were served a meal of noodles and vegetables that was simply lovely. However, after a few minutes of eating, we noticed a foul smell. The bin lorry had arrived to collect the bins, and the smell coming from it was just awful, and accompanied by flies. It stopped just outside our restaurant (which was tiny and open to the outside). We readjusted the fan so there was a breeze over our food to blow the flies away, ate as quickly as we could, and got out of there! It was a real shame as the food was lovely otherwise!

We also tried Pho Bo which is a soupy concoction with spring onions and beef. I wasn’t keen on this, but to be fair we ate it in an airport, so we may not have had the best example of it!

Overall, despite our ongoing unsettled tummies, we enjoyed the Vietnamese food that we tried. Since we have been home we have found a lovely Vietnamese restaurant in our home town and when we eat out that is one of our favourites places to go!

Next blog: How to Travel in Countries with different Alphabets