My favourite thing about Nashville by far was the Honky Tonks. I was simply mesmerised by the talent and the music. We arrived early to get a seat, and had a burger and several drinks, staying there all evening. 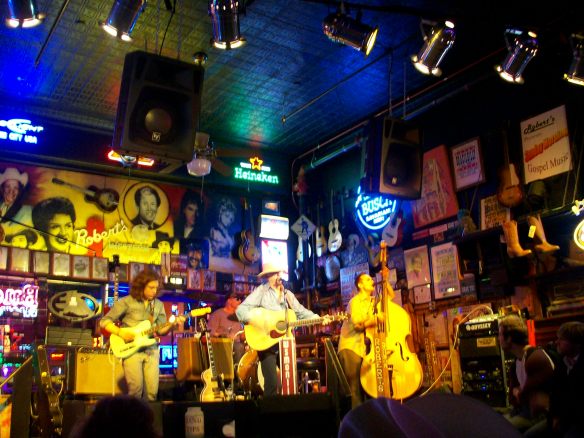 To be fair to the other Honky Tonks, we only spent any real time in one – Roberts Western World. We popped our heads into others and they looked good, but Roberts was simply amazing and we were glad we had followed the recommendations in the guidebooks.

We saw two bands while we were there, both country music, and both wonderful.Some of the songs, like “The Auctioneer” was unbelievable! I won’t say much more as you have to go and experience it for yourself, but I’m so glad I bought their album!

The atmosphere was also fantastic. Everyone was so friendly and we met couples from Michigan and Canada (the woman had the same name as me, which was exciting as it’s a fairly unusual name!) who said they come to Nashville every couple of years to go to Roberts Western World. A really sweet older couple were wearing complete cowboy-style outfit (denim dungarees, cowboy boots, cowboy hat). I couldn’t tell who was a local wearing normal clothes, and who was a tourist and had picked up all the gear.

We spent time exploring Broadway and nearby streets. The atmosphere of the whole of Broadway was excellent, with Honky Tonks and restaurants everywhere and everyone in a good mood. In fact, some people were     drunk , and I watched one gentleman approach one of the horses which transport tourists up and down the street, pat the horse, and say “You’re like a big dog!” 🙂

We looked around the various souvenir shops, sweetie shops, and boot shops. I was tempted to get some cowboy boots as they are SO COOL, but they felt so uncomfortable to me! My mission to find comfortable cowboy boots continues…

Nashville is known as the home of country music. (Of course, country music has its roots in folk music from UK, but we’ll let them have that one… 😉 )

We paid an obligatory visit to the Country Music Museum and Hall of Fame, which I understand is compulsory viewing when in Nashville. This has a brief exhibit about the roots of Country Music, and then a small display on every notable person in country music. Finally, the museum culminates in the “hall of fame”.

Now I don’t want to be negative, but I was disappointed by this museum. Maybe to a country music buff it would be great, but I didn’t know many of the singers. I enjoyed the first part about the roots of country music and vintage films of the same. And it was interesting to see the Blue Suede Shoes mentioned in Carl Perkins’ song and later covered by Elvis (especially as I had just been to Graceland!). And the exhibits about country music stars that I had heard of (eg. Dolly Parton and Shania Twain) were ok, but most of it went over my head. As for the “hall of fame”, this was just a circular room with the smiling faces of everyone on the hall of fame, but in my view it was just really tacky! (sorry!). I felt afterwards that the museum was contrived (and expensive) and a bit of a tourist trap. Maybe for die-hard country fans who will appreciate the more obscure country music stars, it would be good, but for someone from the UK who hasn’t heard of most of it, it wasn’t that interesting –  and I would advise people to head to the honky tonk bars instead!

In fact the CMAs (Country Music Awards) (an awards show like the Oscars / Baftas etc) were in town when we were there, and we did hear comments around town about how that was the glossy commercialised side of country music, but the real stuff’s going on every day in the honky tonks! I’m inclined to agree 🙂

2 thoughts on “Honky Tonking in Nashville”