What can I say about Sultanahmet, the Old Town in Istanbul?  The skyline is awash with domes and minarets, framed by the blue of the Bosphorus Strait. It is one of the most stunning – and different – places I have been to.

We started with the Blue Mosque – one of the best known mosques and so-called due to the blue tiles inside. It was really peaceful inside and we spent a while just sitting cross-legged on the floor, gazing at the vast domed ceiling.

The Blue Mosque may be the most well-known, but there are beautiful intricate mosques all over the Old Town. We wandered around and popped into various mosques for a peep. They were all interesting but it was also a chance to sit on the floor in a cool space, which was pretty welcome after pounding the streets all day!

All the mosques we visited were organised thus:

We visited the Basilica Cistern which is in a scene in the James Bond film “From Russia With Love”. Hmm should probably be more cultural. I mean, which was built in 532 (which is obv v old as that is a year with only 3 digits!!) as an underground water storage space, basically. It still has water in it (WITH FISH IN IT!!) and lots of ancient columns. If you paid attention at school you will recognise the column types like doric and um, all the other popular column types whose names escape me now. We really enjoyed this and found it really unusual, and a cool break from the heat of the sun!

I was undecided on whether to visit Hagia Sofia  / Aya Sofya, but the guidebook described it in glowing terms. I’m pretty sure they called it the jewel in the crown of Istanbul, or something similar. I’m afraid I would have to agree with a contrary review I read on Trip Advisor which said “Overpriced and Overrated”. Now that may make me a Philistine as it is a cultural marvel – apparently it makes all the cathedrals in Europe looks postively modern, and it has had an interesting past, being used as a church, then a mosque etc, and there are some gold mosaics of Jesus upstairs. However, if you’re not that into history, it may not take your fancy. For me, I preferred the serenity of the Blue Mosque (which was free!), and I think many would agree that 30 Turkish Lira (around £9) is a lot to get into a church.

It is certainly quite vast though, which is an impressive feat as they built it probably before cranes and cherry-pickers had been invented… 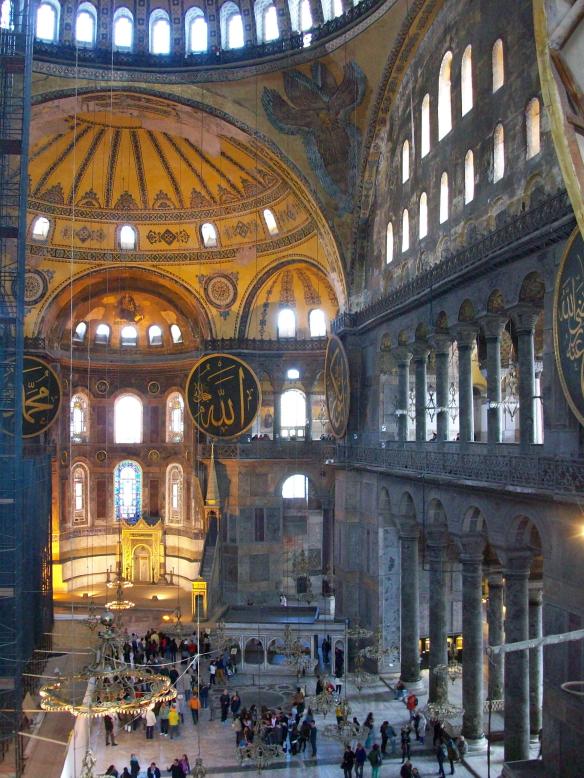 One day while wandering around the old town’s streets and alleys we came across a small park with an outdoor gym, with cross-trainer type machines. We had fun trying out all the machines and my BF had so much fun he split his trousers! It was the funniest gym workout ever! 🙂