The Acropolis stands over the city of Athens and can be seen from most places in the city.  We ignored advice to get there early before the crowds, and instead went late afternoon. This was a gamble but luckily it paid off; the crowds had been and gone and we had the place to ourselves.

It was beautiful up there with great views over the city. The Parthenon itself was majestic but unfortunately covered in scaffolding and so forth due to the ongoing reconstruction. It’s strange to think that but for the reconstruction it would be much more of a ruin. It begs the question, where does the old stop and the new begin; should we allow it to deteriorate naturally with weathering so we are looking at the REAL THING, or should we continually mend it, so we are looking at something much more complete, but which was built within the last decade?

And once again I was reminded of how obnoxious tourists are, and just how many photos they like to take of the same shot. Yes, your 200th selfie was just as good as your first. Now STOP!!

We just had time to get to the Theatre of Dionysus before it closed (the downside of going late in the day!). This is a ruined amphitheatre which is very well preserved, but it freaked me out as there were lots of silverfish (horrible insects – bleurgh!) running around so I was happy to leave promptly!

A large mass of rock near the Acropolis (Areopagus, or “Ares Rock”) was the first ever law court in the city, where they used to hold trials. Today it is a good place for lounging around admiring the views over the city. 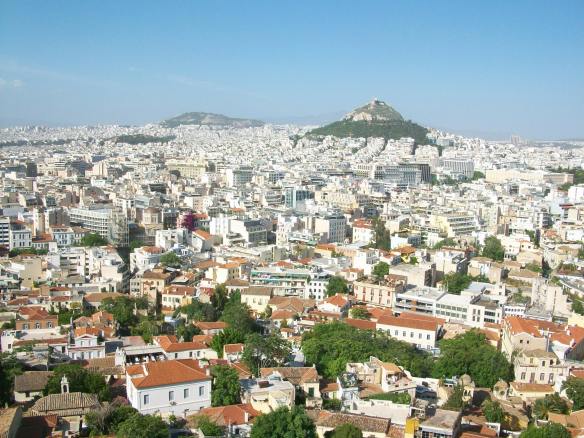 I had read several stories online about muggings and bag thefts in the wooded area around the Acropolis. Despite this, we decided to walk to the top of the hill overlooking the Acropolis – we thought it would be Ok in daylight. We were very much “on guard” and I was super suspicious of any person I saw. There were men who appeared to be guards half-way up and at the top, but in my paranoia I thought they might have been muggers masquerading as guards! (They weren’t in a uniform but seemed a bit official so I was unsure who they were).  I was glad we did the climb as the views was spectacular, over the whole city and down to the sea. But I was glad to have got out safely!

We left the Acropolis area while it was light, as although it would have been lovely to see the sun set from there, I did not want to be up there in the dark. With all the trees to hide behind and all the stories I had read, it did not seem like a safe place to me, especially as it became more lonely as dusk approached. You will have to judge it for yourself, but my advice would be to head to the lights of town before the sun goes down.

In the car park of the Acropolis there were women selling shawls. They tried to thrust the item into your hands, presumably with a view to refusing to take it back and then making you pay for it. One was literally begging us to buy it, repeatedly saying to my boyfriend “Please boy!!”. It was quite uncomfortable and the lady next to us gave in and bought one (for 20 Euros), much to the displeasure of her husband.

There were also ladies selling roses, using the same technique – trying to make you take it (or if you won’t take it, physically attaching it to your bag or clothes so you have possession of it). They approached me, flattered me by saying I looked like Angelina Jolie (I obviously don’t!), and then came at me with a rose, trying to put it into my bag. I side-stepped it. This was just like what we had experienced in Istanbul, so it’s not just Athens! And I’m quite prepared for this stuff, but if you were an unsuspecting tourist it could be quite unpleasant, as they invade your personal space.