Eating in Singapore was easy. There was a plethora of choice so we were able to find a good variety, while not getting ill or going crazy with spice levels etc. 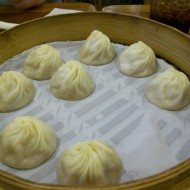 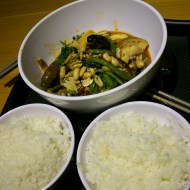 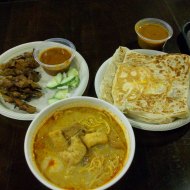 That said, it was not without its challenges. The plan was to get something fairly bland on the first night to ease ourselves (and our tummys) into the new culture. We ended up with a “hot pot” which was probably the most spicy thing on earth.

I’m not sure how we were able to eat it – I think the accompanying plain white rice was our friend. But to make matters worse, I got stabbed in the mouth halfway through the meal. When I extracted the offending item, it was a thorn! It looked like it had come off a rose bush. When I later told my Chinese friend about it, she explained what it was (which I have promptly forgotten) and said it is used for flavouring, but you are not meant to eat it. Had I known that there would be inedible thorns in my food, I would have inspected every mouthful!

So far from being a gentle introduction, our first night became a bit of a baptism of fire (literally). But after that, we could handle anything! 😉  And the rest of our stay was indeed easy, food wise. We love Asian food, and you could buy inexpensive asian food at food courts in every mall throughout the city. Each food court had a stall selling Singaporean food, Chinese, Japanese, Sushi, Malaysian, etc. So I was able to try a smorgesboard of Asian foods during our stay in Singapore.

I must admit I stuck to easy foods, like rice dishes with vegetables or chicken. There is definitely the possibility of trying different new foods, but I wanted to just have an easy time and not be like “why is there an eye/brain/intestine in my food?”.

At the food courts, prices are around S$5-6 per meal. If you want to eat for even cheaper (around S$3 per meal), there are also also Hawker Centres which are basically a collection of food stalls in outdoor spaces (covered, with seating), as opposed to the more upmarket food courts which are in nice shopping malls.

We stumbled upon a Michelin Starred place with a massive queue. It was slightly more pricey than we would normally spend for lunch but we discovered we could afford to eat there, so thought it was worth a try, if only to be able to say we have eaten in a Michelin starred restaurant! It was divine. It specialised in little “dumplings” with pork inside, which melted in your mouth.

We also had breakfast at an interesting place – we were served strong black coffee, french toast with a sauce that tasted like stewed apples, and 2 half-boiled eggs each. You are meant to break the eggs into a bowl, stir them, and add a mix of salt and pepper. It was a bit of a random breakfast, but surprisingly nice. (I say surprisingly as at home we would never eat uncooked eggs!).

One of my fave meals was a Malaysian meal from a food court. Satay chicken skewers, a bowl of steaming malaysian curry, and a type of roti… it was just wonderful.

Of course you can go more upmarket and go to nice restaurants. At the other extreme to our food courts, when we went to Marina Bay Sands Hotel, it was S$9 for a coke! At those prices, and with fresh delicious food at every food court and hawker centre in town, we stuck to our cheap eats!