We were gutted when we read that the boat trip to Ang Thong National Marine Park was not running in November. It was in the crease of the page of my guidebook so I hadn’t seen it, and I was practically self-flagellating at the thought of such sloppy planning. Now what would we do?? How could we go to Ko Samui and miss Ang Thong? The Islands where The Beach was set…

We were totally relieved and excited therefore when we found out that tours were still running – yay!  We booked a tour at one of the many tour operators in Ko Samui, and on the morning of our tour we were picked up by a minibus already packed with young tourists that looked like they were on their Gap Yah.

The excitement was short lived as we realised that the waves were not to be sniffed at. A Chinese lady was sick over the side, which subdued us and I focussed on breathing techniques (breathe in when the boat rocks towards me, and out when the boat rocks away).

Our first stop was to give us Sea kayaks, so we could paddle round a headland to a beach. It wasn’t a particularly difficult row – about 30 minutes. We all had double kayaks, and I sat in front and insisted on rowing myself as I can then feel the balance of the boat. If my BF, behind me, was to put his oar in as well, I would have lost my balance and fallen in! So my BF spent the time taking photos. 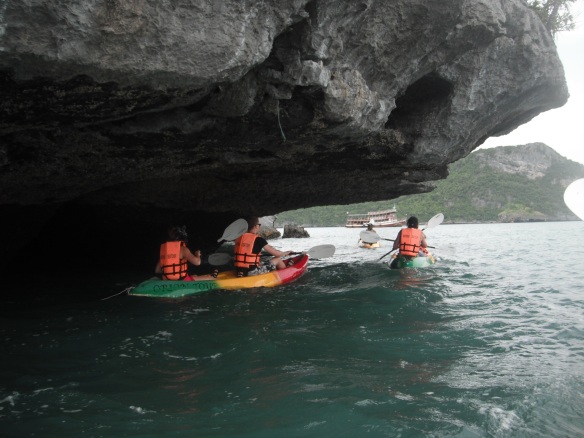 I was freaking out as I’d taken my valuables onto the sea kayak with me. I did this for 2 reasons (1) The man on the boat gave us clear plastic bags so we could waterproof our valuables, so I thought we were supposed to, and (2) because I’d read on the internet about people going through your bags if you leave them on the boat. So my valuables were safe with me, but I began to think this was worse, as a sea kayak is basically a plank of polystyrene… if it overturned, my camera would be long gone!  So I was glad to reach the safety of land.

The next section involved a steep climb up almost vertical stairs to a viewpoint to see a blue lagoon. It was a hard climb in the humid heat and once I’d seen the lagoon I gave up and headed back to the beach. My BF continued for views over Ang Thong Marine Park. 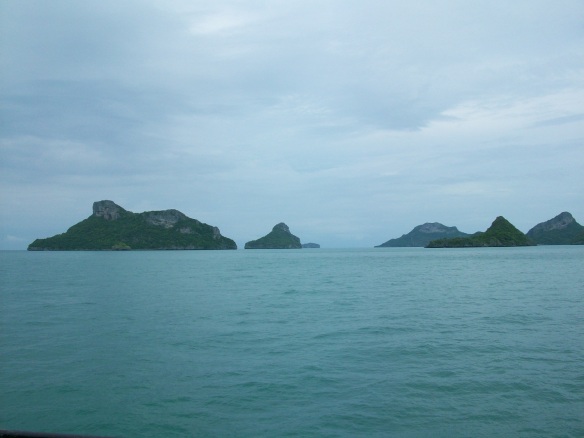 We had lunch on the boat which was really yummy – a yellow curry. But I didn’t want to eat much in case I was sea sick later. And indeed as we sat there bobbing along, sea sickness was starting to creep in. However this was soon washed away by a massive storm. We had torrential rain and big waves, and the boat steered across the bay in the hope of finding a more sheltered spot, but in vein. Everyone else fled off deck but I was too scared to move due to sea sickness so me, my BF, and an Australian couple stayed on deck, joking “Rain? What Rain? We’re British! We’re finishing our dinner!” 🙂 It was difficult though and the torrential rain ricocheted my curry onto my shirt. The water poured onto deck, and at one point as we watched our lifejackets being washed overboard and float away, I asked my BF “are we going to die?”! On the plus side, my sea sickness totally disappeared – it turns out if you get distracted by a potentially life threatening situation, all thoughts of vomit go away… As, eventually, did the storm.

Last stop before going home was snorkelling. I don’t know why they even offer this, since they know that visibility is zero. It’s a con really, to sell the tours with snorkelling as one of the attractions. It raises expectations, which are promptly dashed when you get in the sea. We had already “googled” this and found out that there was no visibility for snorkelling, so we weren’t expecting much and my BF enjoyed splashing about having a quick dip.

We returned to base on calmer waters, but on the return trip everyone’s head was on the table, waiting for land!

Overall, I’m sorry to say that I was a tad underwhelmed with Ang Thong. I’m definitely glad we went, but it wasn’t as beautiful as Ha Long Bay in Vietnam (maybe we’re spoilt by having been there as well!), and I seemed to spend most of the day either feeling sea sick or being worried about various things. I never had any “Wow” moments, sadly. Nevertheless, I’m glad we went – if we hadn’t, we would have always wondered….