Bangkok can seem like a frustrating city. It is hot, busy, the transport system leaves a lot to be desired, and some people are very ready to scam you. But there is also a lot of beauty in Bangkok.

Many of the beautiful temple sites are concentrated around the Chao Phraya river, namely the Grand Palace, Wat Pho and the Temple of Dawn.

Wat Pho is a beautifully ornate complex of Buddhist Temples. This is the home of the Reclining Budda, which is as it sounds – a giant Budda which you will struggle to fit into one photo. 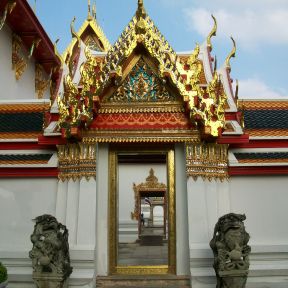 We spent a pleasant hour or so wandering round, and ended up sitting crossed legs in a temple. We were surprised and delighted when several Monks joined us and started chanting. It was a heady mix of incense and chanting and before long my BF had gone to sleep sitting up! 🙂

As we approached the Grand Palace a man approached us and warned my BF “you won’t get in with shorts”. When we ignored him, he then said “it’s closed”. I said “no it’s not” and we carried on walking.  Luckily, we had read about this scam beforehand – they convince you that the place is closed, before offering you a ride in their tuk tuk, which takes you from their brothers / cousins / cats shop, before bringing you back and overcharging you on the tuk tuk fare.  Sure enough, as we walked away from the man, we noticed loudspeakers on the perimeter wall of the Grand Palace saying “Do not let anyone prevent you from entering the palace”. 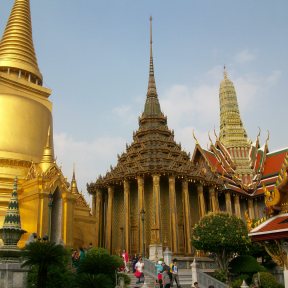 The Grand Palace itself was quite breathtaking and very ornate. All gold leaf, shiny tiles, and bright colours sparkling in the evening sun.

The Temple of Dawn is just across the Chao Phraya River, so is easy to combine with Wat Pho or even Grand Palace. It is a steep climb up to the top, but gives great views all round.

I hadn’t heard of Jim Thompson before, but I read about him when we were in Bangkok. And what an intriguing tale it was. Jim Thompson was an American businessman who had an important role in revitalising the Thai Silk industry and turning it from a dying art to a thriving industry. One day, he went for a walk, and never came back. Searches never found him, nor recovered a body. His disappearance remains a mystery.

Jim Thompson’s house is a tourist attraction as he collected various traditional Thai structures from around Thailand, and had them reconstructed as his house in central Bangkok. It was a pretty oasis of green in the centre of a busy city.

We went to a Farmers Market that was being held to mark Autumn, with pumpkins, food, and haybales to sit on. It was charming, but seemed very middle class and western. It amused me to see a Thai person taking a photo of the tartan fabric. Tartan is so commonplace for me, coming from Britain, but I guess if you are from a far off country tartan is probably quite exotic! 🙂 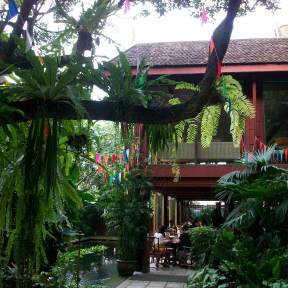 There was a man spinning silk from silk worm cocoons. An almost invisible thread of silk came off each cocoon and he was twisting them into silk thread. He was putting the thread in a basket all messed up, and another girl sat nearby spinning the messy pile of silk onto neat reels. I found this fascinating.