After visiting the beautiful temples in Bangkok, of course we had to visit the Kao San Road – this is apparently described in The Beach as “the centre of the backpacking universe” or something like that.

The Kao San road is aimed at the backpacker market, with hostels, street food, and souvenir stalls mostly selling T-shirts advertising local beer brands (yes of course I got one, I am a cliche!). 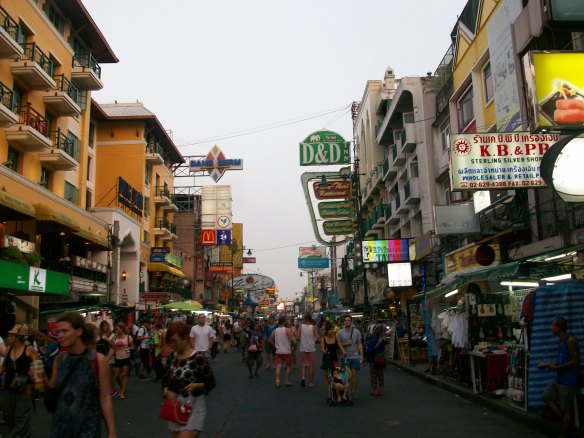 I was shocked to see stalls selling fake ID cards, right out in the open. I’m not sure if these are intended as a joke, or just straight up identity fraud. Maybe they’re harmless enough if you’re 16 and wanting a fake ID to get into a bar to impress girls, like the hapless McLovin in Superbad. But when you’re over 18 what could this possibly be for that’s legal? And surely if you take them up on the fake PADI scuba diving card, the joke is likely to be on you!

After the Ko San Road we got a Tuk tuk to Rajadamnern Stadium for Muay Thai. The tuk tuk driver led us off down a dark alley to his tuk tuk. I was on high alert, like “are we walking into a trap?” Luckily not. He was legitimate and we found the tuk tuk and he proceded to drive like a maniac to the stadium, stopping only so he could buy a drink for himself on the way?! I followed some advice that a colleague had given me, to keep your elbows in! Anything hanging out of the tuk tuk is at risk of being seriously hurt!

At the Muay Thai stadium, we had been briefed by the guidebooks about ticket touts outside, and we knew we had to ignore them and go straight to the ticket counter. We also knew from research that we wanted to buy the cheapest tickets, and that the touts would try and up-sell us and persuade us to get the VIP ringside seats. Me and my BF are very stubborn so I knew we would be able to ignore them.

The short version of this story is that despite being well-briefed, we too were susceptible to the insistent ticket touts who get in your face and confuse you. If you’re interested to read the full story, read on. If not, skip the next couple of paragraphs.

As we walked up we were accosted by men, predictably trying to sell us tickets and trying to upsell us. One of them was very insistent and said he worked for the stadium. I told him that we weren’t going to buy from him, and that we were going for the cheapest tickets not the ringside ones. He insisted that we wouldn’t be able to sit down if we got the cheapest section as everyone stands up. This made me doubt myself, as I knew I didn’t want to be standing up for hours. The man offered to take us into the stadium, no strings attached, to see the seating for ourselves.

As we went in through the ticket barriers, I noticed him producing 2 ringside tickets to get us in. I said to him “we are not buying those tickets, we are just looking” and he agreed. He showed us to very nice seats close to the ring. We stuck to our guns saying we didn’t need ringside and would leave and buy the tickets from the stadium ticket office. But he wouldn’t let us leave and told us to stay put. He went away and came back and charged us the cheaper price and let us stay in the ringside seats. So arguably we came out of the whole thing well – we had great seats and didn’t pay a premium for them. But we were totally confused about what was going on, and it seemed to good to be true, so I was unable to relax as I thought he would come back to us and demand more money. He didn’t, but I would much rather know that I had paid and I was allowed to be there, and no funny business was going on.

I would advise anyone to ignore the touts (even though we didn’t manage to!) regardless of how persuasive they are, and go straight to the ticket counter. You can sit down even in the cheapest seats.

In terms of the actual Muay Thai, this was also a bit disappointing. I’m no expert but it was quite obvious to me, having eyes, that in the later stages of the fight, the fighters seemed to be playing for time, and just dancing around each other at a distance, not actually fighting. We later read that it’s because the fighters have figured out who is winning, and by that stage in the game the outcome won’t change, so they just jog around waiting for the end. They were certainly not fighting hard / trying their best until the end. This was really disappointing to me as that’s not sport, to me.  Also, we later read that the heavy influence of gambling on the fights means that fighters will also pretend to be rubbish at the start of the fight to increase the odds against them, so they can suddenly become good later in the fight and win (with those having bet on them getting good odds). It is also traditional for the fighters to take it easy in the first round to gauge the opponent. So out of 5 rounds, you might only see 2 or 3 of actual fighting.

All in all, I much preferred our Muay Thai match in Ko Samui. In contrast to the above, this was a wonderful experience. This may have seemed a bit tourist-heavy as such a high proportion of the audience were tourists, but it was a great atmosphere. We went to see a good fight and we clapped good play, and applauded the efforts of the loser too. The fighters fought hard to the very end (or the fight ended with a knock-out!). I don’t know why it would be different to Bangkok – I can only guess that as the tourists had each paid good money to be there, they don’t need to influence the game with heavy betting to make money.

The Bangkok Muay Thai match cost 1800 Baht (arond £33) each which I thought was a lot. That is English prices (and expensive English prices at that!). However the snacks were cheap – my BF took advantage and had popcorn, coke, and a hot dog! (Coke: £0.20 approx, and Snickers bar £0.30 approx).

One night we ventured to the red light district in Patapong. Mainly as whenever you hear about Bangkok, you hear about ladyboys and red light districts, so we went to see what all the fuss was about. In truth, it felt fine – lots of people sitting having drinks or dinner. In some of the bars you could see older white gentlemen having attention lavished on them by younger Thai women. We didn’t see any ladyboys, but that could be because we couldn’t tell the difference! The women in the bars could well have been ladyboys… we were none the wiser!

We were approached by several men selling shows, who showed us menus with various vagina-related shows such as “Smoking Cigarette”, “Chopping Banana”, and the dubiously named “Vagina Fish In”. Each to their own, but we didn’t really fancy a vagina fish in, so, our curiosity satisfied, we headed back to the skytrain.

En route we explored some of the market stalls along the road. One lad told us his goods were handmade by his family, so we bought one – but we later found they were mass produced in Vietnam! I guess we were naive to believe him!

The Siam Square area is a modern area full of massive shopping malls. If you want a shopping fix, or a meal like pizza, this is your place! (Although see one of my next blogs for our “interesting” experiences eating in one of the malls!) 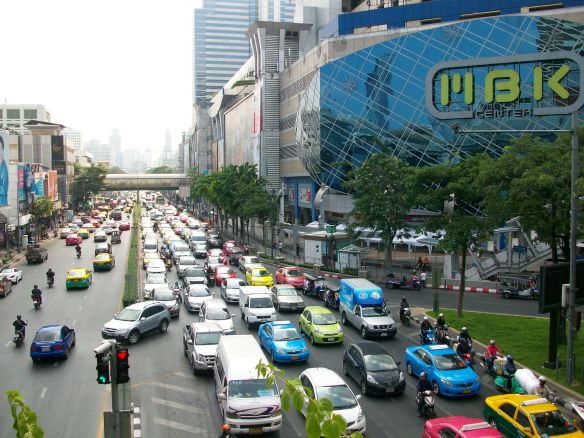 We took a short boat trip in a traditional longtail boat from the Temple of Dawn. This was fun and we had a tour of some of the canals criss-crossing around the suburbs. I felt a bit guilty being a (relatively) rich westerner having a personal boat tour around the clearly deprived areas. These areas have not had the investment that you see in other parts of the city. 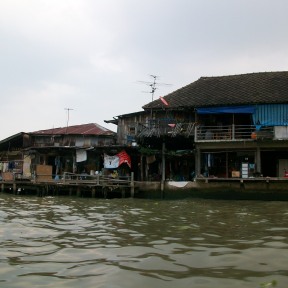 Boat up the Chao Phraya River

You can take the ferry boat up the Chao Phraya River in Bangkok very cheaply. We frequently took the boat from Sathorn Taksin, as it links up with the Saphan Taksin metro stop (which takes you to Siam Square and the modern malls of Bangkok). As you approach Sathorn Taksin ferry stop, there is a stand selling tourist tickets for the boat up the river. If you walk past that and join the queue with the locals (the outer queue nearer river is for the boat going up river towards Grand Palace and Wat Pho etc), you can take the normal boat (orange flag works!) – this is much cheaper (around £0.30 per journey) but the boat takes the same route! You pay for a ticket on the boat.

You have to be fairly certain of what you’re doing, which is difficult the first time when you have no idea! We witnessed a member of staff grabbing a tourist by his backpack and physically pulling him backwards while shouting at him, as he was apparently in the wrong queue for a boat (it later transpired he was in the right queue in the first place so he and his family got very angry as this led them to miss their boat!).

OveralI I didn’t find Bangkok to be a very friendly city. I hate to make generalisations, but all I can comment on is our experiences. There were people waiting to overcharge or scam you at most of the places we went. I guess you’re always going to get some level of this in any country. Tourism is a big employer in Thailand and the gap between “haves” and “have-nots” even within Thailand was massive, so maybe tourists are seen as fair game. But Thailand is known as the land of smiles, so I guess I was expecting more. But Bangkok did not smile at me.

6 thoughts on “Bangkok; Keep your elbows in on the Tuk Tuks!”