Our visit to Bern, Switzerland was a flying one. We were going on the train from Zermatt to Zurich, so we decided to stop in Bern for about 4 hours, with assurances from friends that we would be able to cover most of the centre in that time. 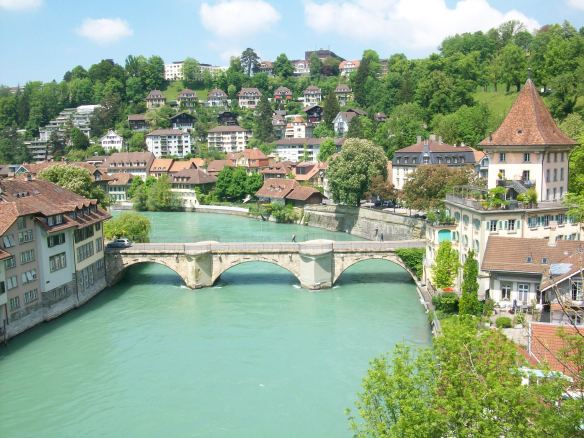 Bern is actually the capital of Switzerland (although it feels smaller than both Geneva and Zurich) so we were fascinated to get a small taste of this town. As we were stopping off on our train journey, we had our luggage with us and it was a hot day… but we have fabulous backpacks which are quite comfortable so it wasn’t too bad. We made our way down the main street from the train station to the river. This was a really pretty street that just went on and on and on…. 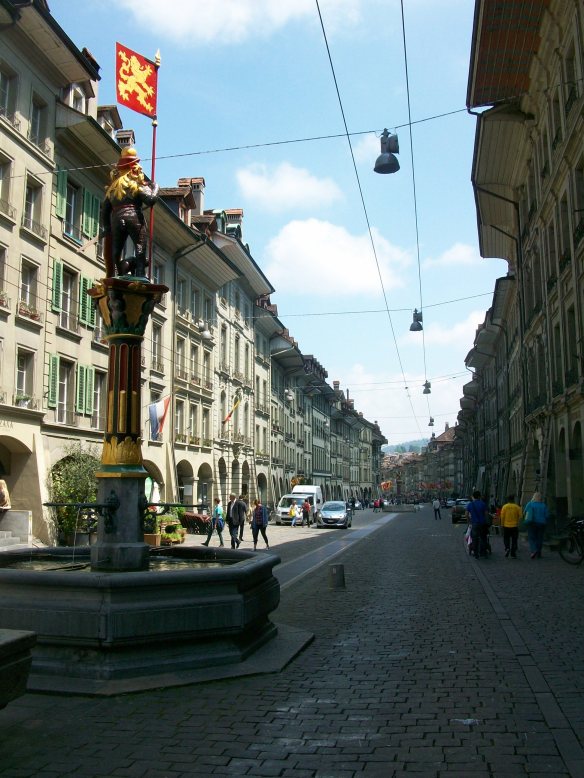 It was really lovely to wander along this street, past street performers, past people enjoying coffee in the sunshine, and past Einsten’s birthplace. We finally found ourselves at the river.

There is normally a bear enclosure here just next to the road, but this was temporarily closed so the bears were gone. I think there is a Swiss conspiracy against me and my BF actually getting to any tourist attractions as whenever we get somewhere, it is closed!! Just like the Aletsch Cable Car in Fiesch. I blame myself for not researching well enough, but I also think the Swiss tourist office should make more effort to warn tourists “FYI, just a heads up – don’t take the thousand mile trip here as the thing you’re coming to see is closed”. There was not even a sign at the train station to prevent us from walking down there! Grrr!

We headed back into the centre of Bern and looked round a lovely farmers market. We bought some crepes and sat eating them while watching a giant chess game. I adore Giant Chess. We have seen it in Christ Church, New Zealand,  Boca Raton, USA, and Zurich, Switzerland. I think Giant Chess is a real community hub. Normally for old men, admittedly, but that’s OK. It’s sociable, keeps your brain active, there is literally no downside!! I wish we had it here in the UK and I am writing to my local council to ask them to set one up. We played ourselves in Zurich and it was great! 🙂

Nearby were my other fave thing… water fountains that kids can splash around in. A free water park in the centre of the city!

After that we got some milkshakes and sat watching the world go by, before heading back to the train, psyched that we were able to get a taste of beautiful Bern in an afternoon.