We hit unchartered territory and left Old Faithful behind, past the vast Yellowstone Lake, and cruised down the John D Rockefeller Jr Parkway to Grand Teton National Park.

We drank in the views of the Tetons over Jackson Lake. It was stunning at sunset, and equally stunning at night. I have never in my life seen so many stars. Where I live, there’s light pollution, so if you see one star you’re doing well. At my Mum’s house you can see the stars much better; all the constellations, and that is beautiful. But here, there’s not a light for miles and you could see not only the main constellations but millions of smaller stars behind them. I had no idea you could see this much with the naked eye… it was breathtaking. Of course, it was distracting to look at as I was worried a bear would come out of the bushes and eat us, but what I did see was amazing 🙂 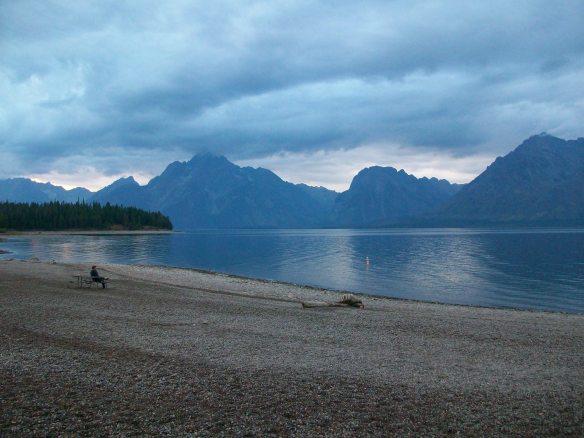 In the morning we stopped at Jackson Lodge, a big hotel, for breakfast. Surprisingly, my BF wasn’t too fussed about this place, but I loved it. For the first morning of our holiday, there was a chill in the air and everyone was wrapped up in warm socks and coats. There were two roaring fires in the corners of the room which were really cosy. And at the other end of the room, massive glass windows with views of the Teton Mountains (covered in cloud!), Jackson Lake, and the willow flats. We read that you can see Moose (plural: Meese?) there, as Meese eat Willows, but we didn’t see any.  The dining halls / restaurants were busy so we had a yummy breakfast bagel and coffee sitting on a sofa in the large lobby, read the papers, and then went on our merry way.

Eventually we reached Jackson. We hadn’t really budgeted any time for here, but we had to stop the car and have a quick look round.

Jackson had a charming main square with bars, shops, etc, and we would have liked to spend more time there. There are also 4 massive arches made from Elk Antlers (and a Moose Antler in the middle – yes that’s right, I can tell the difference now!!). I found these to be rather macabre, but then my friend told me that Elk shed their antlers each year, so no elks were harmed in the making of these arches – phew! 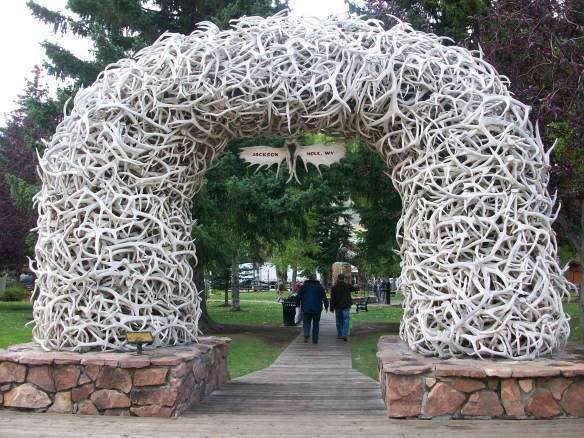