After rolling our snowmobile, one of the most pressing questions I asked the doctor was “Can I still go on my husky ride?”.  I’m such a tourist.  Luckily the answer was yes!

On the day, we arrived on foot to a winter wonderland – picture perfect woodland under a blanket of snow (just like the rest of Finland!). We paid up and had a talk on how to operate the sled. On the downhill you have to brake, and on the uphill stretches you have to run to help the dogs. You also use your weight to lean from side to side where needed. The main thing is to keep a distance of 20 metres from the sleigh in front, so you don’t crash into them and hurt the dogs, so “keep the distance!” was a mantra we heard many times! As my leg was hurt we decided my BF would drive the sleigh and I would sit in it like a big fat pudding 🙂

When we got to the dogs it started very quickly. They had briefed us that it would take off very fast, faster than a rollercoaster, so the most important thing for the driver is to brace yourself and hang on!! And all of a sudden we were off, racing through the white landscape. 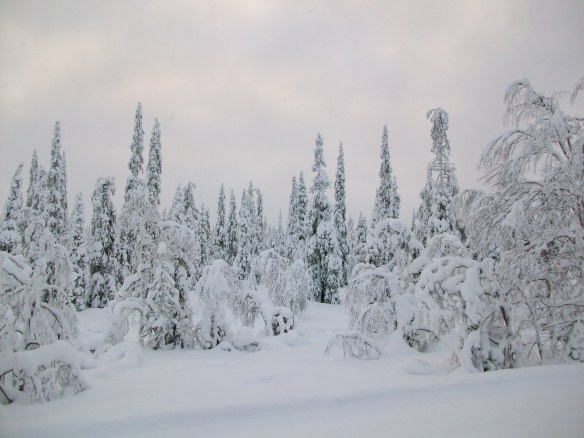 It was beautiful and we meandered through wide meadows and forested areas. Beforehand I was worried about going the wrong way or coming off track, but it was pretty impossible to come off-track as we were driving in a groove about a foot deep.

And the dogs… they were magnificent. So strong and fast. They were basically on a permanent setting of “Run Fast”, so the driver has to control them by braking. It was amazing. If they got thirsty they lolled their tongues out the corner of their mouths and swept it along the snowy bank next to them. In other words, they were lapping up snow to drink as they ran along!

There were 2 sleighs ahead with other tourists on them, and our procession was led by staff on a snowmobile, so we felt safe. You can swap drivers half way but we decided to stick with what works 🙂 There was only one dicey moment when we almost tipped over. I was horrified after what had happened the previous day on our snowmobile. But we leaned the other way and managed to correct it. (In post-match analysis, we have attributed blame for this near-tipping to the fact that we were turning a corner so my BF needed to be leaning into it, but we were also doing downhill so he had one foot on the brake, which inhibited his leaning).

Anyway, it is unlikely that you would tip over doing this activity, and it is magical and truly a once-in-a-lifetime type experience. If you get the chance, do it!  It is quite expensive but to be fair, the husky farm can only earn money half the year. And the huskies seemed well kept and well cared for, so that’s what you are paying for. It is also a child-friendly activity. Also, I might make it sound very extreme (and it was to me!) but the party in front was a petite Mummy with 2 small kids in the sleigh, so it is OK for families and so doesn’t technically class as an “extreme sport”, despite my misgivings! 🙂

Afterwards, we met some of the husky puppies, and my BF held a puppy which wriggled the writhed around such that my BF (who is over 6 foot and strong) struggled to hold him! We were then taken inside to eat sausages and sweet buns, washed down with coffee and blackberry juice. This was included in the price. We sat down and chatted with the owner who told us about his dogs, and how they know it is safe to drive on a frozen lake etc. It was fascinating and a nice way to warm up after an unforgettable experience.

As we waited for the bus to get back to Ruka, a kind-hearted man from the husky farm offered us a lift home, so we got back to town for free! I was uncomfortably squashed into the front of a van between the driver and my BF trying to keep my leg away from the gearstick. We made some small talk then ran out of things to say and lapsed into silence. I was worried about being rude but I have read that the Finns like silence rather than small-talk – perfect! 🙂

I must also mention to Reindeer, back at Ruka – in a pen on the mountainside by the ski runs (but you can walk up to them with a little effort). We were able to feed reindeer which was also pretty special and unique experience. 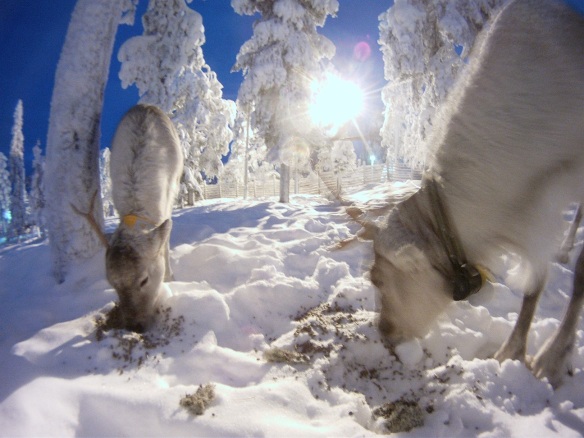