I had read that Ithaca, New York was a nice place to stop off en route to Niagara Falls. We started the day in Seneca Lake and drove down along the lake heading for Ithaca. As it turned out, I didn’t take to Ithaca but the drive down there was lovely. 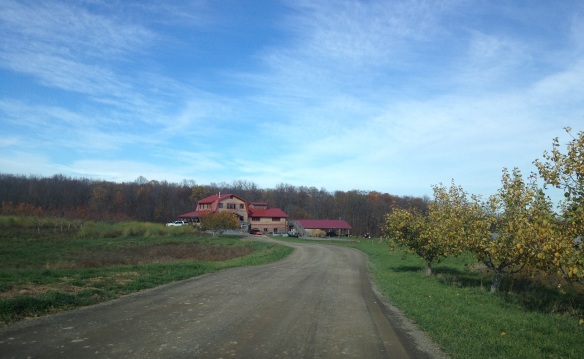 We were in winery country, so passed so many cider houses, cheese farms, wineries, etc. We stopped into a lovely winery and sampled their wine which was really different and cool experience. Apparently this region is the same longitude as the Champagne region in France so the grapes are similar.

After this we meandered south to Ithaca, and had a lovely day stopping at waterfalls and crystal clear lakes.

When we finally arrived at Ithaca I’m sorry to say that I was a little disappointed. It is a University town, with Cornell Uni situated there. It is certainly a little “alternative” with independent shops, selling books, vintage stuff, and alternative Zen type stuff. In fact I don’t recall a single chain shop there. The town’s Mall was not what I expected – instead of the shiny modern malls we have come to expect from the USA, this was an old building with some independent shops in the basement, along with a cafe selling nice fresh wholesome foods. A group of students were occupying the large table and having a class on some work of Literature. I was surprised to find such a place in the USA to me, but it’s nice that it exists, and I can imagine that students are able to really immerse themselves in their studies there. Along with some bars for nightlife – obviously!

After our brief visit to Ithaca, we headed west to Watkins Glen and watched the sun set from the pier of Seneca Lake. We drove north to Geneva and as it was really cold and windy, we ran a race to the end of the pier to warm up, under the light of the full moon. 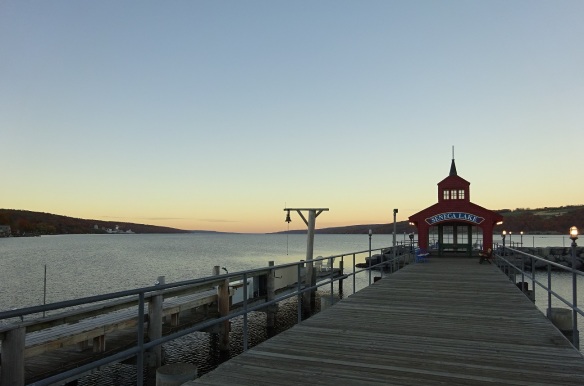 When we first visited towns with European names, we were delighted and gleeful. We took photos of signs in Paris, Tennessee, and Milan, Tennessee and visited Birmingham, Alabama. But today as we went through Interlaken, NY and now Geneva, NY, the novelty had well and truly worn off! 🙂