A comparison of our Royal Caribbean cruise and our P&O cruise, for all those cruise nerds out there! 🙂 I will compare several aspects, including embarkation, cabins, food, activities, safety, hygiene, service, and disembarkation. 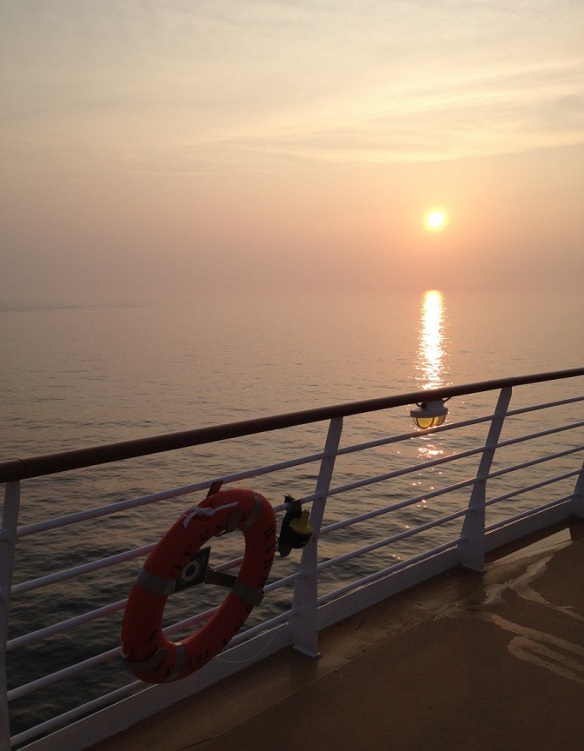 On RCL, boarding the ship was seamless. Beforehand we had been given a choice of boarding times, and we chose the one we wanted (12-12.30). When we arrived we were greeted by plenty of staff outside with I-Pads to check us in, and then we just walked on. I mean, we went through security as we went, but we didn’t have to wait a single minute. Basically as fast as we could walk was the speed that we boarded. Also, the dock that the ship was parked at (gate 8, berth 101) was the nearest to Southampton and the train station so it was really convenient and about 10 mins walk for us.

On P&O boarding was a nightmare. We were given a time to arrive (no choice) and faced a queue for the check-in clerk, had to complete a public health declaration on a piece of paper, and then faced a long (about 30-40 minute) wait for security. Also, the dock that the ship was parked at (gate 4, berth 38-39) was pretty far from Southampton centre and the train station so it took us about an hour to walk there.

Winner: RCL was the clear winner in this category. It is even more amazing that RCL had a far bigger ship yet managed to board it so smoothly – but I guess you have to have a slick operation with such a big ship.

We had balcony cabins on both cruises, and both were fairly similar. RCL had a large bed (king size?), a sofa, desk, en-suite, and balcony. P&O had twin beds, but that was fine, and the rest was much the same. They were both clean.

Both had lovely buffets with plenty of choice and themed nights showcasing different types of food. We really enjoyed the buffets on both ships.

RCL had a restaurant but the queue was so long we never managed to eat in it. There were also plenty of other cafes eg. Sorrentos Pizza, and a couple of Cafes, a Snack bar, and a Self-serve ice cream bar, so if you get peckish during the day there are places to stop at.

P&O had a restaurant which we did manage to eat in, as they were very accommodating. You also get given a slot for dining each night so you are guaranteed to get in there, albeit maybe not at the time you might prefer! You can pay more to have first choice at this though. The food in the restaurant was 5 star.

Winner: It’s a draw. We loved both buffets and although P&O definitely has the edge due to the restaurant, we also enjoyed being able to stop into any cafe we liked on RCL.

RCL had a plethora of activities to keep you busy, if you wished. There were 3 big swimming pools and several jacuzzis on the ship. Plus 3 water-slides, though 1 of these was closed. There is a massive slide dropping 10 decks(!), a climbing wall, a zip-line, 2 flow-rider surf simulators, a basketball court, a gym, a running track round deck 5, a shopping promenade, a park, a carousel, and mini golf. Plus several bars, the Royal theatre, an Aquatheatre (which was closed), and an Ice-Rink. Also a Casino but this was a smoking area and it was so smokey I couldn’t even go in there.

P&O also had plenty to keep you busy – 2 swimming pools, 5 hot-tubs, a hydrotherapy pool, a tennis court / basketball court / cricket pitch (all in one, they change the space around to accommodate all sports), several shuffleboard and qoits-style games, a library, several bars, a theatre, an art gallery. There was a casino also which was small but good fun, and as it wasn’t covered in smoke I could go in there!  There were also lectures and classes so you can learn something! We took a dance class and heard a talk about the Marie Celeste.

Winner: Although there was plenty to do on P&O, RCL has to be the winner in this category due to the sheer number of things to do. 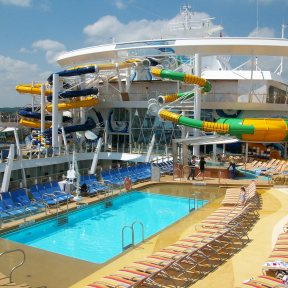 In the case of emergency, on our RCL ship we were asked to congregate in one of around 10 pre-allocated points around the ship. We were allocated to a jazz bar where we were joined by around 100 people. The life-jackets were demonstrated by staff and we were told that they are stored near to our assembly point and we would be given one in case of emergency. They “swiped” our ID cards so they could monitor that everyone had attended. The drill happened before we left port which was good, but there was no further mention of safety throughout our 3-day cruise. I’m not sure what would happen on longer cruises.

On P&O (on our ship anyway) the life-jackets are stored in the cabins (although ours wasn’t in the wardrobe where it was marked – we found it in another cupboard). The muster drill also took place before we left port, and it involved returning to your cabin to get your lifejacket, and congregating in a location (the Theatre, in our case, with another 700 people – the queue to get down the stairs to the theatre was very slow!). The staff demonstrated the life-jackets and then we were all asked to put our own life jacket on. Over the course of the week they then tested the safety alarm (7 short blasts and 1 long) once or twice more to make sure we all remembered it. Also, they did two more drills for staff during the course of the week – one when we were in dock, the staff had to practise their “abandon ship” drill, and another time they did a “man overboard” drill. This all made me feel much safer – that staff and passengers are regularly drilled means if anything did happen we would all know what to do. 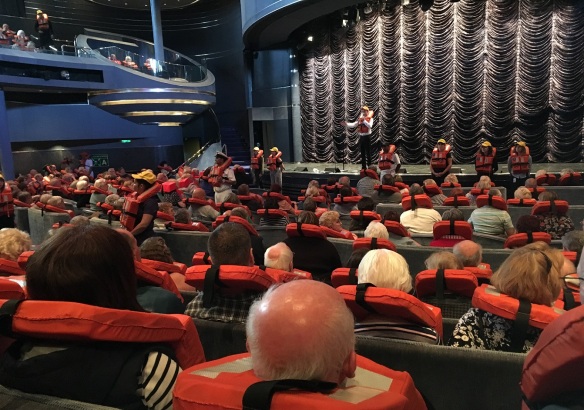 Cruise ships have to be careful about the spread of germs, especially as there have been norovirus outbreaks on some ships. I shudder to think of it.

On our RCL cruise there was a hand-washing station at each entrance to the buffet, and a member of staff  is stationed outside the buffet to make sure everyone washes their hands before entering the buffet. I didn’t notice anyone dispensing this outside the restaurant, but we didn’t actually eat there so I’m not sure.

On our P&O cruise there was a member of staff standing outside the buffet squirting hand-sanitiser in everyone’s hands before they could go in. However, after day 1 (or 2?) the person was replaced by a hands-free automatic machine which squirts the same into your hand. Although you should be able to expect everyone to be responsible and sanitise their hands, I don’t think you can rely on this, so for something this important I think a member of staff should be stationed there throughout the cruise. Norovirus can strike at any time – not just day 1!  I appreciate that this is a tricky one as I hate to be treated like a child and told what to do, so having someone saying “wash your hands!” is annoying to me, BUT I think it is necessary, as not everyone in society washes their hands after the toilet, and I don’t want to be touching stuff in the buffet that they have touched! P&O also provided information about Norovirus in the cabin, and a machine dispensing hand-sanitiser on the dock for when you re-board the ship each time, and a person dispensing hand-sanitiser outside the restaurant.

Winner: Both good but I think RCL has the edge for the enforcement of handwashing before the buffet.

RCL service was good – the cabins were clean and the staff cleared plates at a reasonable pace in the restaurant. However there were moments when I needed a drink and had to wait around 5-10 minutes for service. The vast majority of the staff were friendly but I came across 1 or 2 that weren’t. Nothing terrible, and I was happy with the service overall. Guests Services was very good despite the fact that they had a queue a mile long and it was 1am – that must have been difficult for them and I could see they were frazzled, but they kept their cool and professionalism.

P&O service was excellent. There were so many staff so you never had to wait for service, and everyone was so attentive and nice. In the restaurant the staff remembered what we liked to drink, let us have the soup and a starter (instead of one or the other), and gave us a copy of all the menus we had had during the cruise, as a souvenir. The only 1 person who let the team down was a man on Reception, who was unhelpful. We went to ask about the dining options, and upon finding out that we were we were confused about what dining programme we were on, he made no effort to look it up in the computer for us, so we left with no more info than we started with.

Winner: Clearly P&O. P&O stands head and shoulders above RCL in terms of service. Whether service is something that is important to you is another matter. To me, it is very important that customer service (being polite, friendly, helpful) is high, but I don’t need someone to wait on me hand and foot – I’d rather do things myself and pay less.

RCL did not provide information on the latest time we could be off the boat – they only said “you may leave at 6.30am”. Yes, but I don’t want to! On the last morning there were staff standing around asking “are you all ready to go?” and it just felt like they couldn’t wait to get rid of you. I appreciate they have to clear the ship, but the last day wasn’t great – after a lovely holiday it was very much down to earth with an abrupt bump!

On P&O, we were invited to choose a disembarkation slot. We chose the latest one – 9.45 – 10am. We still had to be out of our cabin by 8am, and out of breakfast by 8.30am, so we went to breakfast with our bags and sat around having a leisurely breakfast by the pool, my BF lay on a sunbed, and then before we knew it it was time to go to our disembarkation point. It was much more stress free, and as relaxing as an early morning can be. It also helped that the ship had put its clocks back the night before, so when we had to clear the cabin by 8, it was really 9am.

Winner: P&O wins hands down for me.

And the winner is…… just kidding there is no clear winner. That’s right, I’m gonna cop out and say they were both brilliant in their own different ways. And they are different;  RCL rates higher for activities/entertainment and the physical ship, and P&O rates higher with service and safety. And they both have great food, and a lovely relaxing holiday!

Next blog: Best Nights out Round the World