Having explored the ancient sights of Taipei it was time to see the new heart of the city. Taipei 101 is one of the most iconic buildings in Asia. At over half a kilometre tall (a staggering 509.2 metres to be exact), it was the tallest building in the world until 2010 when the Burj Khalifa in Dubai (at 829.8 metres) took the title. 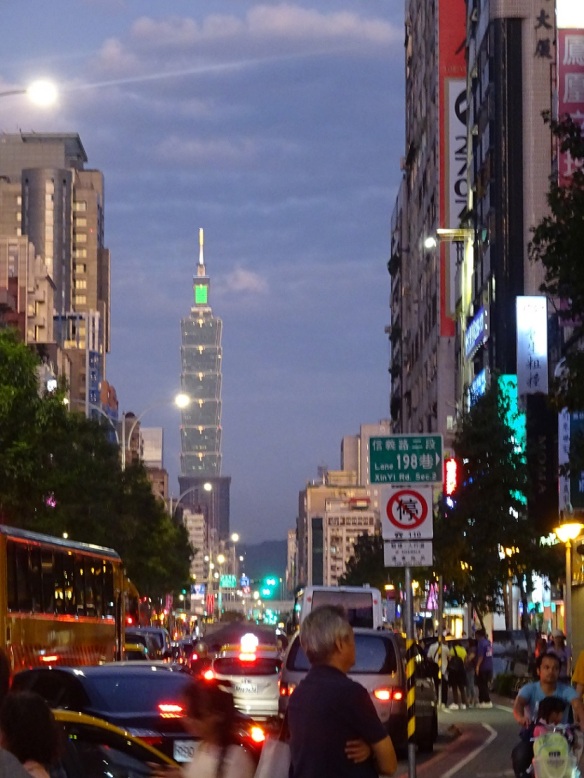 Taipei 101 is 101 floors high, and can be seen from most places in the city. If you want to visit, check the boards in the 5th floor lobby as this will tell you how the visibility is and which sections of the observation deck are open.

Going up, you take a high-speed elevator which travels at 60km/hour from the 5th floor to the top – it takes 37 seconds. It felt slightly nauseating but once the ride was over I was fine.

The view from the top was amazing – the city spread before you like a toy town. 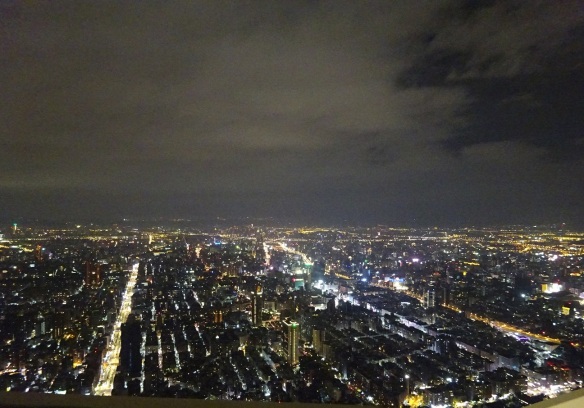 Do allow time to visit the 88th and 89th floors on the way down, as these have an exhibit about other tall buildings, a gift shop, and most importantly, the Damper. This is a massive steel ball hung from cables. If there was an earthquake causing the building to move, the ball is designed to swing the opposite direction to reduce any movement.

There was a video playing next to the Damper showing the ball moving during a previous Typhoon. I found that really scary – standing there knowing if it moves you’re in trouble! (you can see the video on You Tube if you search “taipei 101 damper swaying typhoon soulik” or similar). Overall, I was pleased we visited Taipei 101, but also glad to get back down to sea level!

We took the metro to Ximen Station and when we popped up out of the underground system to street level I was open mouthed! It was lit up neon like Times Square and wholly unexpected!

Wandering down the pedestrian streets around here was fun and a sensory overload – bright lights, shops teaming with gadgets, plastic jewellery, and other such stuff to spend your time and money on. There were also restaurants and cafes, so this is a great place to come if you are a tourist. There are also some Western chains such as H&M. We spent too much money on Cold Stone Cremery ice creams, which we enjoy as you can’t get the in the UK. More on the food in the blog after next.

There are convenience stores on almost every corner – and almost all are either “7-11” or “Family Mart”. Both are very similar and useful for grabbing a bottle of water or a snack if you are flagging.

Overall I would highly recommend Taipei. My impressions are that it is a really interesting and cultural city which is currently still “off the beaten track” when it comes to tourism. Taipei is also very clean (although admittedly on some streets the amount of pollution from motorbikes did bother me), and has good road discipline. So unlike places like Hanoi, there aren’t motorbikes coming in every direction even on pavements. There are actual pavements, and proper road markings. This means you can relax a bit more when it comes to things like crossing the street, or just walking on a pavement. I also found the people to be polite and friendly – they will smile but will let you get on with your day as opposed to hassling you, as you get in some places (ahem- Morocco!– ahem- Vietnam!). Don’t get me wrong – every place has its advantages and disadvantages, and every person has their own preferences. For me, Taipei was wonderful. The food was also lovely – more on that in the blog after next. 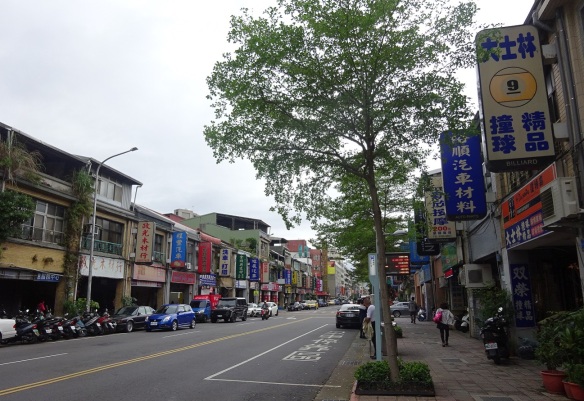