As if World War Two wasn’t bad enough, with concentration camps, the Holocaust etc. Oh wait – there’s more. Comfort Women. Now this isn’t a nice thing to hear about, especially on holiday, but I feel we have a responsibility to hear about it. So I took my husband along to the War and Women Human Rights Museum to find out more. 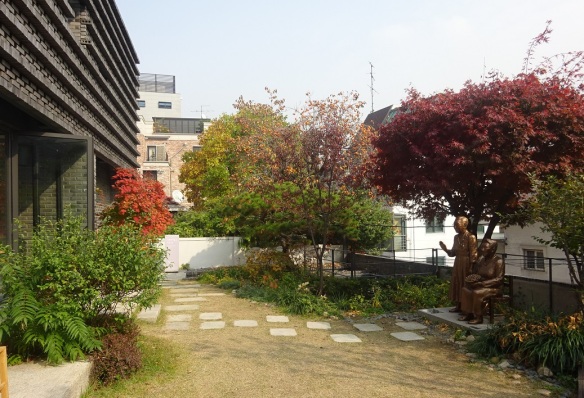 The War and Human Rights Museum which was a fascinating and horrifying look at Comfort Women; a system whereby during WW2 predominantly Japanese soldiers used predominantly Korean Women as sex slaves, or “comfort women”.

I didn’t know much about this beforehand but I had anticipated it would be a kind of ad-hoc rape amidst the horror and chaos of war. I found it chilling to learn that this wasn’t the case at all – it was a very systematic organised and pre-meditated system for rape on a vast scale.

The young women were essentially trafficked – their families were told they would get good jobs and be paid well. They were then taken far from home to a military brothel. The plan shown in the museum showed the comfort women each in a small room with a bed. The men would queue outside. Tickets were sold, and the men one by one went into the small rooms, raped the women, and left. The women would have to endure being raped countless times each day. There was a medic onsite to ensure this whole messed up system could continue without any ill-effects health-wise.

It is awful to talk about and truly shows one of the darkest sides of humanity, but that is precisely why we must talk about it, to prevent it happening again. There was an animated video showing one girls journey as a comfort women and I found it really difficult to watch and it moved me to tears.

After the war, the women, left with unthinkable trauma both mentally and physically, were then left to try and pick up the pieces of their lives. Nothing was said about it for decades until one courageous lady spoke out about what had happened to her. And then more women started to speak up too. The museum displays the evidence of the comfort women system, such as documents, photos, ticket stubs, condoms. They have also compiled a map showing the locations of the comfort stations; these were all across Asia. Unfortunately no photos were allowed in the museum so I can’t show you here.

A UN enquiry has taken place and found that the comfort women system did indeed take place, but Japan has declined to accept responsibility or apologise. So not only did the women endure this abuse but it was then denied, adding insult to injury. And so to this day, comfort women and supporters gather outside the Japanese Embassy in Seoul every Wednesday to protest. If you are in Seoul on a Wednesday you can go to support them.

It was also fascinating to learn about a different perspective. When we were in Japan, we visited Hiroshima. We learnt about the Atomic Bomb that caused extensive damage, deaths, and cancers. This also moved me to tears. It was horrific. In Japan the day the bomb was dropped was one of the darkest days in their history, and it was not difficult to empathise with them on that. However, here in Korea, the very same bomb being dropped meant something very different; the bomb was dropped on Japan and suddenly the war was over, meaning that the ordeal was over for the comfort women. The exhibit recognised the awful effects of the bomb but there was also understandably  an element of relief.

For me, the most disheartening thing of all was that after going round the whole museum and hearing about how awful the Comfort Women system was and how awful it was that the Japanese won’t apologise, the tour ended by saying that sadly the Korean Military then went on to have its own “comfort women” system in a subsequent war??!!  I could not believe it.

There was also an exhibit about rape as a weapon of war. This was done in Srebrenica, Bosnia, and many other places to this day. This is something Angelina Jolie has campaigned about.

Our visit to this museum was truly eye-opening and it made me despair about humankind. But it also gave me hope – the courage of the women to speak out is truly inspirational. the visit ends by visiting a memorial wall and then sitting in the peaceful garden. There were yellow plastic butterflies on which you can write a message of support and attach it to the wall. It was a nice way to end the visit to reflect and commemorate. 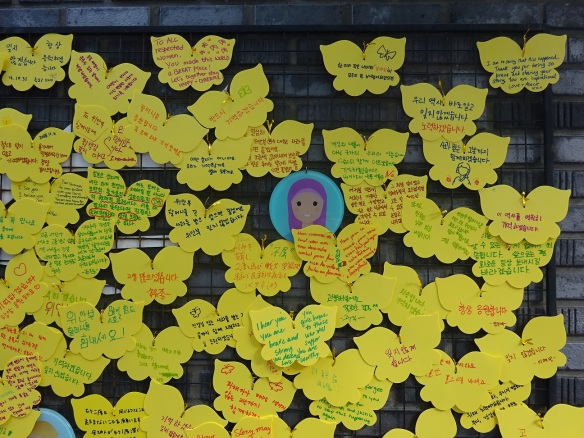 Disclaimer: I am not a historian so would encourage you to research this topic yourself if you are interested.