Portsmouth is a harbour city in Southern England. My Mum had been saying for a while that she wanted to go because of the historic dockyard. I quite fancied being in the sunny south coast with a nice waterfront and Dubai-like sail, while watching the ships pass by. And it was a breath of fresh air.

The Historic Dockyard is quite something. There are various old boats to see, including  the Mary Rose, Henry the Eighth’s boat which sank in 1545, saw preserved in silt at the bottom of the harbour for 437 years (Yes, 437 years!!) before being dredged up in 1982. It is just like the Vasa in Stockholm, Sweden, which was on the sea-bed for around 300 years and is perfectly preserved. There are also ships like the HMS Victory which was Nelson’s ship at the Battle of Trafalgar in 1805, and the HMS Warrior from 1860 which was heavily armoured so no-one dared attack it and it never engaged in battle. Note: tickets are expensive and confusing – see the travel tips section at the bottom of this page.

We took a Harbour Tour which was a lovely way to see Portsmouth from a new angle. We saw navy ships (although sadly not the massive new aircraft carrier as that was away), passenger ferries and commercial ships. We saw a ship being loaded with sails for wind turbines which are made on the Isle of Wight, which were being loaded on a large tanker to be sailed to Finland or similar. This was my favourite thing in Portsmouth – I was fascinated to see modern ships. If you’re going, see the travel tips section at the bottom of this page. 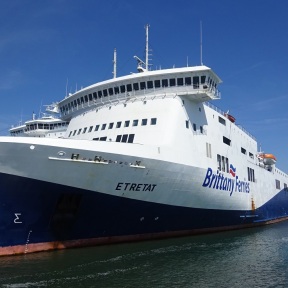 We then went up the Spinnaker Tower which had grand views over the whole harbour. The lift was broken when we went, so we got a discounted ticket for £5 but we had to climb over 500 steps! I was glad there was a cafe at the top as I needed a rest and a cold drink after that climb!!

I enjoyed exploring the pleasant shopping complex, Gunwharf Keys, at the base of the Spinnaker Tower, and we also had a lovely dinner in a restaurant overlooking the waterfront. There are few better things in life than a lovely meal with a view.

in the evening we strolled to Old Portsmouth, where we wandered the cobbled streets and climbed the ramparts of the city and saw the Round Tower and Square Tower.

Later in the evening we moved the car to Southsea and strolled along the coast. We were all enthralled to see the Hovercraft which powers its way across from the Isle of Wight and drives straight onto the beach! I have never seen anything like it before and it was really exciting!

Overall I am really glad we came to Portsmouth – it is an English city I have never been near before, and it was a real gem on a nice sunny day.

I found the Ticket situation confusing, so here is my understanding:-