We were heading to New Orleans but wanted to visit a plantation while there. Oak Alley Plantation is one of several large Antebellum mansions along the banks of the Mississippi River which was a plantation in the days of slavery. 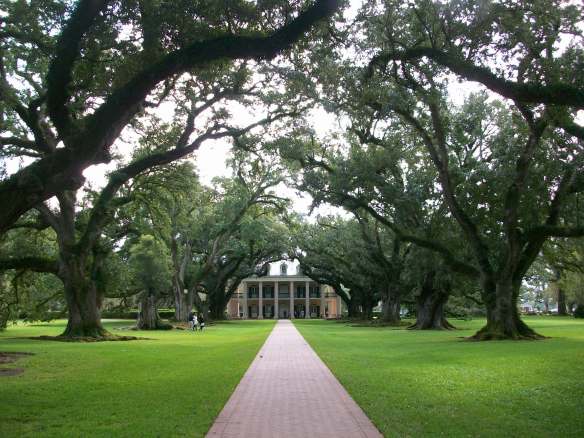 We decided to splash out and stay in a cottage on the grounds (the doctor’s house), which was really convenient. The cottage was really cute and we met a friendly couple from New Jersey who were very friendly talkative characters! In the morning we had a leisurely breakfast of french toast, bacon and orange juice in the cafe overlooking the old oaks.

We had an interesting tour of the main house. It was clearly an attractive mansion, but it was shocking to hear stories of how the slaves were treated. There was a large velvet fan over the dining table and the tour guide explained that this had a rope attached to it and a slave child would sit in the corner of the room and pull the rope to move the fan back and forth during dinner for ventilation.

Awful as the house slaves had it, the field slaves probably had it worse, doing back-breaking work. The slaves would have slept in the outhouses which have been recreated to show the conditions the slaves lived in.

The contrast between the Mansion with it’s beautiful oak lined avenue, and the slave’s houses was quite stark. My boyfriend commented that it felt a tad weird to be touring the antebellum mansion to appreciate the architecture, given the shocking history of slavery that took place there. But I guess we have to see both extremes; the opulent mansion and the sparse outhouses, to understand it.

After looking round the plantation we walked down the drive and climbed the levee of the Mississippi, which is just across the road. We sat there for a while enjoying the peace and quiet and watching the big river roll by while contemplating what we had just seen. I’m glad I made it to the plantation, and I would definitely recommend a visit if you are in the New Orleans area.

2 thoughts on “Stunning Oak Alley Plantation and its Dark Past”